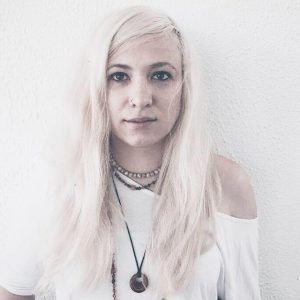 Growing up in a generation where many refuse to answer the door without a warning text, it’s pleasantly surprising when Polish-born musician Agu rejects a café meeting in favour of a fireside tête-à-tête. I’ll soon find out she’s no stranger to playing MC; she used to host live music in her living room to promote local artists. Bear in mind that hers is a standard suburban Galway house where it’s a miracle if you have room for a sofa, never mind musicians and their equipment.

33-year-old Agnieszka ‘Agu’ Jones is a tranquil, funny and reflective interviewee as well as a warm hostess. She enquires about my college course, which leads us to the show she hosts every second Wednesday at 10pm on Flirt FM, The Oh! Zone, alternating with Ailbhe Jagodic. She plays a mixture of genres from ambient to electronic to choral music. “I try to make the playlist so that it’s good for relaxing at night,” she explains.

She loves having her own radio show, although the small talk between songs flusters her somewhat. “I’m always very nervous since English is not my first language. When I speak on the microphone my English gets much worse…  And then I listen to myself and I’m like, ‘Holy f**k!’”

Apologising for swearing, she continues. “This is also why usually when I perform, I don’t really like speaking much. I’m kind of introverted, so when there are people in the audience it’s much easier for me to connect with them through music than through, you know, speaking nonsense”.

This is evident from catching her live show. She’s a low-key presence on stage, but an enthralling one all the same. Her stirring vocals fold into her atmospheric guitar work that blends elements of folk and ambient music. She plays with various “electronic toys” to transform her acoustic instrumentation and singing into ethereal and stirring soundscapes that envelop the audience.

However, Agu isn’t confident about her skills as a lyricist. The biography on her website agumusic.com simply states, “Her language is music”. She attributes this to the challenge of writing in English, Polish and Czech.

“My Czech is probably, at this stage, better than my Polish,” she admits, “but it’s still not my mother tongue. It’s still a foreign language. It’s like I’m hanging somewhere in between and sometimes I get lost in those languages”.

Agu hails from Gdynia, a port city on the Baltic coast. She moved to Prague at 19 to study Czech and fell in love with the city, dabbling in amateur theatre as well as music.

Her family likes to tell a story she explains: “I don’t know how much truth is in it really – but they say I started singing even before I learned how to talk, that I was a tiny infant lying in my crib and they would watch a TV series… and after a couple of days, my uncle was like, ‘[Gasps] She’s singing the theme song!’”

“I don’t think I was really singing,” she adds. “It was probably more like me trying to imitate some sound…”

Agu’s friends recognised her ear for melodies and harmonies and encouraged her to make music, but it still took a while for her to warm to the idea. “I guess it was just growing inside me and at a certain point I just started writing songs, one after another,” she says.

“Something changed, like a barrier fell down, and a lot of new songs just started coming to me… I don’t even feel like I am creating them, I feel like they come from somewhere else and they just need to be put on paper. They had a very therapeutic function I’d say. Whatever I needed to process within me just went on paper.”

She released her debut album Ke Světlu (‘Towards the Light’) in 2015, generating buzz in the Czech music scene.

“I would do about 70, 80 gigs a year. When I started out I would play for free or pass a hat or whatever. And then it slowly started growing, I started getting offers for actual gigs for actual proper money and it started going really well.”

So why did she choose to start all over again as an unknown artist in Galway? That old chestnut: love. A love that, unfortunately, didn’t pan out.

Nevertheless, the move brought her a new beau in the form of local musician and producer Tony Higgins, with whom she is working on her upcoming album. New single ‘Ines’, in which Agu sings of transition and rebirth, is their first collaboration.

However, love is not a topic Agu touches on too often in her music: “I think I wrote my first love song two weeks ago!”

Instead, she cites her motivation for the album as “different changes you go though as a human being. Or for me, more as a woman… So far, most of the songs reflect certain periods and certain episodes from my life, certain events that changed me as a person a lot”.

She doesn’t want to reveal too much, but does say this: “So far, every song that I wrote, the title becomes a female name. And they all mean a lot to me. They’re all very personal confessions, like me kind of opening my heart and just [being] like, ‘Here I am completely naked. This is what I am, or this is what I was, or this is what I would like to be.’”

The album is untitled and still in its infancy. Agu is hoping to put one more single out before its release in summer or early autumn. Three years of planning has been put into it – “It’s high time to release something!”

Still, she’s trying not to stress about it too much. “A wise person once said, ‘Music is like a fart. If you push too hard, it becomes crap.’”