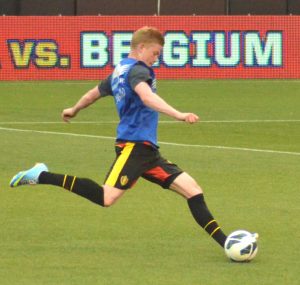 In recent times, an unusual trend in football fandom has ascended into prominence. Instead of supporting a club some people now opt to follow their favourite players, in some cases with an almost religious zeal.

A quick browse through Twitter and you will find Messi Maniacs, Ronaldo Royalists and even the occasional Neymarite all steadfastly defending their chosen cult. They can be found advocating their favourite star in heated online arguments, often referring to individual honours such as the Ballon d’Or.

In amongst all this, it should not be forgotten that football is and always will be a team game. Having said that however, this Premier League season has long been devoid of any title race so perhaps we should take a leaf out of the player-centric football fan’s book by focusing on the question of who will be the recipient of the PFA Player of the Year?

Last season, six players were nominated with the tireless N’Golo Kante coming away with the big prize. One would expect for there to be six nominees once again and it is likely a substantial proportion of the six will come from the champions elect, Manchester City.

Pep Guardiola side has steamrollered all before them, and you could make a half-decent case for at least six of their players to be nominated.

Club stalwart David Silva has been at his silkily skilful best all year, Leroy Sane’s lightning speed and sharp awareness has terrorised defences up and down the country, Raheem Sterling has scored crucial goals, whilst the metronomic tempo-setting Fernandinho might be the hipster’s choice. Also despite not having his best season, Sergio Agüero is a name worth mentioning.

One City player however stands out as the obvious candidate, the mesmerising Kevin De Bruyne. If we were to judge by appearance, De Bruyne would appear an unlikely figure to be the leader of one of the all–time great teams in Premier League history.  The ginger Belgian carries a slightly portly frame by the standards of professional football but don’t this let this deceive you or detract from his obvious brilliance.

Probably De Bruyne’s two strongest traits are his hawk-like vison and pin-point passing. There is no finer example this season where he exhibited both of these qualities than in City’s 7 – 2 demolition of Stoke back in October.

For the Citizens second goal, scored by Raheem Sterling, De Bruyne played an astonishing reverse pass to Leroy Sane which had more disguise on it than a child at Halloween. The pass was so remarkable that it prompted Jonathan Liew of The Telegraph in England to write an entire article on it that tried to decipher how De Brunye could have possibly thought to play it.

In that article Liew writes; “it’s a pass not even De Bruyne could see, but one that as a result of his innate footballing intelligence, his perception of space and time and probability, he played anyway”.

This line sums up why KDB, as he is referred to, is such a unique player. Few other players on the planet have the spatial awareness to see the passes the Belgian sees, and even fewer then have the ability to execute the way he does.

In that aforementioned Stoke game, De Bruyne also played a raking through ball for City’s sixth goal.  It was a pass that severed Stoke’s defence and took five or six players out of the game in a flash, and the type of pass that shows why he leads the Premier League in assists with 14 at time of writing.

A more underrated aspect of De Bruyne’s game is his industry. Likely as a result of having the demanding Guardiola as his manager, De Bruyne is very much a modern number 10 in terms of work rate with him tracking back as hard as any of his teammates. In fact, in Champions League football De Bruyne has run more than any of his City teammates at time of writing, clocking up nearly 65 kilometres in just six games.

In all honesty, there would be no question that Kevin De Bruyne would win player of the year if it wasn’t for a certain Egyptian who has been causing havoc at Anfield.

Liverpool’s Mo Salah has been nothing short of a revelation this season. He is the league’s top goalscorer at time of writing with 28 goals, and with seven league games left there’s every chance he could match or even eclipse Andy Cole’s and Alan Shearer’s record of 34. Salah also chips in with assists and has ten in the league already this season.

After stumbling at Chelsea, Salah has been a changed player since his return to England after a spell with Roma. What is fascinating about Salah and the way Jurgen Klopp uses him is that he plays wide and attacks cutting in.

Despite being a wide player Salah is still Liverpool’s main source of shots and goals, and only Harry Kane has more shots than the 25-year-old this season. This is facilitated through the way Liverpool play with Roberto Firmino playing centrally in the ‘false nine’ position and dropping deep to create the space for Salah to exploit.

Salah’s pace and ball control makes him one of the league’s best dribblers, and it is because of these traits he has been described as reminiscent of Messi. His first goal in a recent 5 – 0 win over Watford was in particular strikingly similar to Messi’s famous goal against Bayern Munich in the 2015 Champions League semi-final, which left Jerome Boateng on his backside. While obviously nowhere near Messi’s level, his style of play is similar with his direct running a problem for any defence.

In terms of other candidates, I personally expect the other four nominees to be David Silva, David De Gea, Harry Kane and perhaps Raheem Sterling.  However, De Bruyne outshines everyone else on that City team so that rules out Silva and Sterling, whilst Kane’s recent season ending injury makes extremely unlikely the Tottenham striker will win. De Gea has bailed United out of trouble time and time again this season, but in a season where we have had some transcendent outfield performances a goalkeeper would be lucky to win.

This leaves us with Salah and De Bruyne. One crucial factor that should be noted is that the voting has already taken place. Indeed, the voting happened during a period when Salah was on fire while De Bruyne had taken his foot off the pedal slightly, saving himself for the Champions League. For this reason, Salah might just edge it.