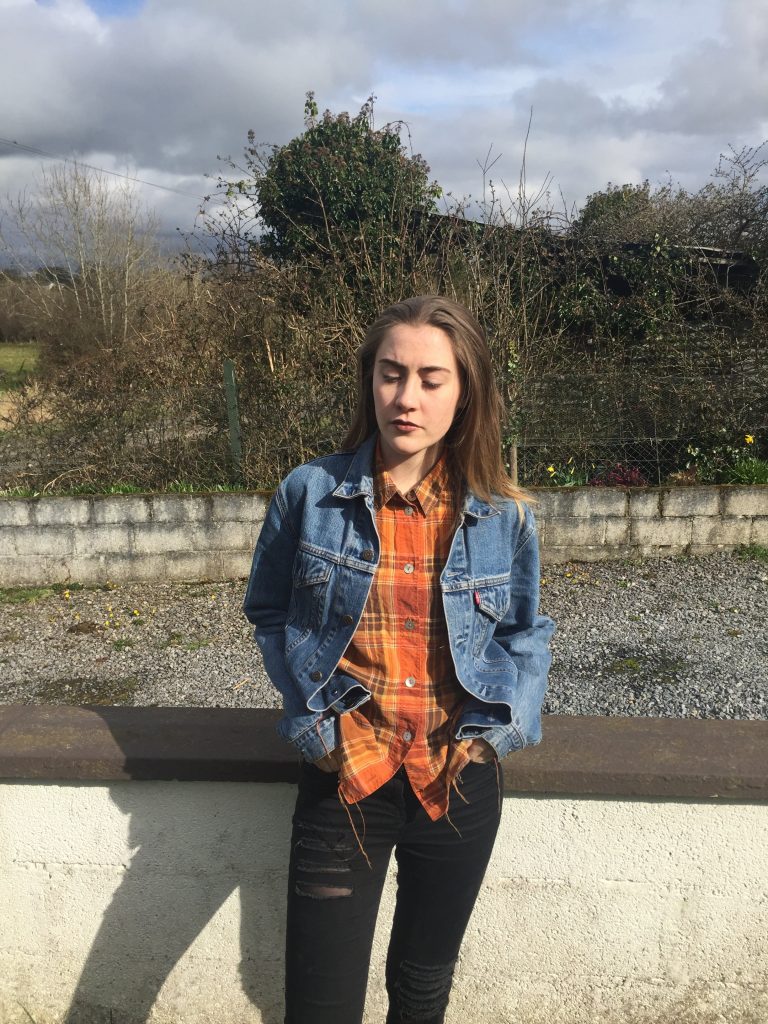 Music and fashion have always been big influencers in our world. The way we dress, how we act, what we listen to, their reach is endless. But is there a connection between these two trendsetters? Can what we listen to stretch even further into our style and look?

The purpose of this series is to show that, well, yes they can. As musicians gain recognition for their obscure, inviting sound, we too get inspired by the clothing they wear, the hairstyles they make iconic and their ability to transform the society around them.

David Bowie, The Rolling Stones, Elvis Presley; the many artists that have made an appearance in these articles gave us an insight into the bond between sound and style like no others. With wild hairstyles, eccentric patterns and shaking hips, these vibrant characters (along with countless others) are not just talented musicians. Their influence spread further than ever imagined, musically, socially and within the fashion world.

The end of this university year means the end of this Lost Looks series. So to conclude this column, I’ll be taking a look at ’90s grunge and the endless impact it has made on generations then and now.

Grunge as a genre collaborated punk and rock music to create a harsher, more angst sound that captured teenage fury eloquently. From fashion, movies and literature to even politics, grunge grew from nothing to everything in a very short space of time.

Grunge’s “fusion of many styles” is one of the key reasons for its popularity. With artists like Nirvana, Pearl Jam and Soundgarden at the forefront of its success, grunge was the voice of an angry, adolescent generation that had something to say. Its music and lifestyle focused on credibility and one’s expression of self, dealing with issues of loneliness, boredom and isolation – emotions and ideas that their audience too experienced.

The fashion had a similar, careless attitude. Opposing the ’70s glam-rock customs of costumes and flamboyant outfits, grunge was low-key in fashion, but strong in influence.

Seattle, Washington in the ’90s was the perfect spot for finding this underground rock music. Its location was important as it “became a synonym for a new mass revolt against traditional values in popular culture.” Seattle brought killer bands like Pearl Jam, Alice in Chains and Nirvana to the stage and in turn became the birthplace for their music.

In Rad’s The Contribution of Grunge to Social Change, his explanation of what grunge represents highlights its role in society. The mainstream success of the grunge phenomenon seems misplaced here above all other genres discussed in previous columns. Grunge as a focus on social issues, the devastation of youth and boredom, gathering mainstream success was never part of the act.

Julianne Escobedo, a cultural writer, believes Kurt Cobain, one of the primary influencers of this genre to be responsible for this cross over: “Not only did he make it okay to be a freak, he made it desirable.” Nirvana’s song Smells Like Teen Spirit in 1991 was considered an “anti-anthem” for those “discontented with their lives”- a possible indication to its fame. To a teenager full of misplaced angst, frustration and harrowing emotions, Nirvana, along with other grunge artists, gave a sense of empathy to those feelings.

Grunge fashion brought checkered shirts, baggy jeans and a careless sense of style. It was like even having clothes on was too much of an effort for these musicians! This style can be seen on musicians like Kurt Cobain and Eddie Vedder. Ironically, this style-but-not-actually-a-style-style has revisited the fashion world and the ’90s grunge look is a desired styling statement today.

This is quite ironic seeing as grunge was never about trending styles or fashion shoots, it was about a sense of rebellious freedom in not giving a damn about appearances, possibly something lost on generations since. This is why its upsurge in the fashion once more is interesting, proving the influence musicians and bands can have socially then and now.

Women of rock, more specifically grunge, made their own waves in the music and fashion world at the time. Bands like Hole, Garbage and The Cardigans with female fronting musicians told stereotypes, social norms and conventional fashion to shove it. Hole’s lead singer, Courtney Love, married to the late Kurt Cobain, gave a feminine look to ’90s grunge. This ‘Doll Parts’ musician can be seen styling silk laced dresses with bare feet at Hole concerts or posing with shift, doll-like dresses in photographs. Her iconic bed-head hairstyle and imperfect red lips are also key looks for this ’90s style.

The 1993 Wisconsin-based band Garbage and lead singer Shirley Manson also brought some iconic grunge looks that perfectly represented the genre’s style. Seen modelling both a pink bob hairstyle along with careless, messy, long hair, Manson’s hairstyle shows the careless nature of this genre. Styling leather skirts and dresses, an eye-catching leopard print faux fur jacket, finishing off her looks with biker boots, she could be considered one of the most fashionable musicians to come from nineties grunge.

The inspired looks for this final column gives two separate styles of ’90s grunge that best represent the genre. The first is a genderless style focusing on the clothing of bands like Nirvana and Pearl Jam. The orange checkered shirt and Levi’s denim jacket (bought for 16 euro in COPE Galway charity shop) are obvious links to the grunge lumberjack inspired style. The ripped jeans offer a modernised grunge look but if you wish to stay true to the genre blue, faded, baggy jeans would be your go-to-choice. Beauty-wise, as grunge was carefree, natural to no makeup suits this look perfectly. 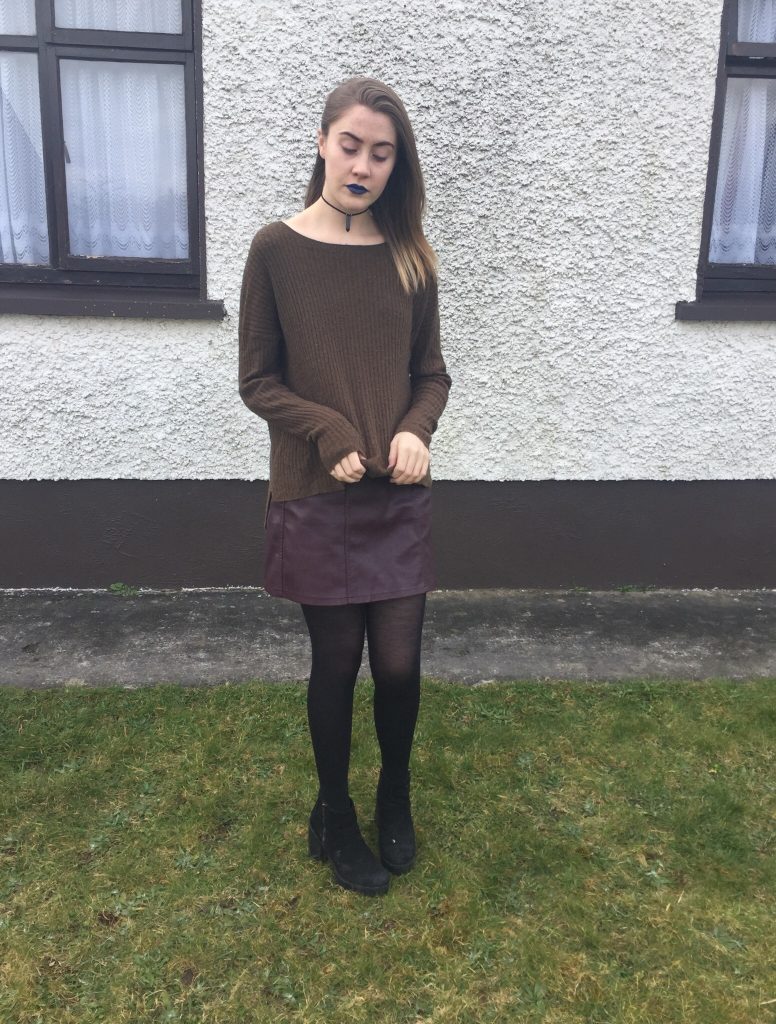 The second style is feminine-focused, taking inspiration from previously discussed artists. The purple leather skirt (New Look) offers the angsty styling to this genre’s look. Worn with an oversized, green jumper (Topshop) again, the key element for this look is to represent rock and rebellion. I’ve styled this with big boots, blue lipstick and natural hair.

There is little to dispute when it comes to the impact of ’90s grunge then and now. It was a genre that expected little and received so much. The style and sound of these artists are sure to reappear time and time again, inspiring further generations with their attitudes and demeanour.

As a final parting for this series I would like to direct a thank you to those who have enjoyed the articles and I hope you gained an insight into the styles of the past and their influence of our fashion today.