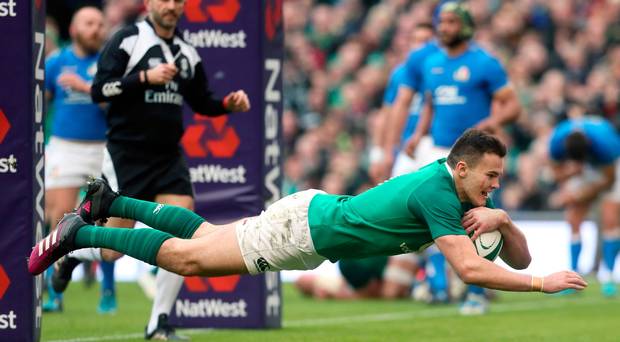 In the wake of just our third Grand Slam ever, it may be slightly easier than usual to get dragged aboard the hype train and suddenly declare ourselves World Champions of 2019 already. The fact that the World Cup in Japan is still a year and a half away doesn’t concern the bandwagoners who have apparently just witnessed the greatest rugby team of all time.

Of course, we have just witnessed a team swat aside their competition in Europe with a new and exciting squad and style of play. English combustion and French inconsistency aside, it was still a majorly impressive tournament for Ireland. They showed across the different games that they could deal with what the opposition threw at them.

Not only that but they also maintained their own way of playing throughout. You don’t see New Zealand adapt their game significantly depending on the opposition because they’re confident in their own style getting them through in the end. It takes a lot of confidence to do that and clearly Ireland are one of the most confident teams on the planet at the moment. So just what can we expect from this young squad in the next big challenge for Irish rugby?

As mentioned above, the 2019 World Cup in Japan is the main focus of the rugby world at the moment so this year’s Six Nations as impressive as it was, will still be just another step to the top in the minds of the players and coaches. The last time we won a Grand Slam back in 2009, many felt that it was the peak of the team’s powers.

The golden generation of O’Gara, O’Driscoll, Stringer, O’Connell, Hayes, etc was coming closer to the end by the time the 2011 World Cup in New Zealand came around. Hayes and Stringer in fact weren’t even in the squad for the competition. It was a wonderful Grand Slam to win, but the gruelling and global nature of a World Cup means it is still the benchmark of the greatest teams. Timing is everything when it comes to building teams to peak at the right moment, we just didn’t have it last time out.

There’s definitely an argument to be made that the timing is much better this time around. Out of the extended training squad for this year’s Six Nations (35 in total), there are just nine players aged 30 or over.

Out of the starting lineup and replacements for the Slam decider against England that number drops to five, while Rory Best is the only one who may struggle to remain a key figure in a year and a half although he’s been proving doubters wrong for over a decade already.

At the other end of the scale, the younger ages are dominating the squad. Man of the match in the Slam game at Twickenham Tadhg Furlong is only 25, while fellow prop Andrew Porter is only 22. Other key members of the pack James Ryan and Dan Leavy are 21 and 23 respectively.

The backs are also full of youthful exuberance, Joey Carberry is just 22, the midfield trio of Henshaw, Farrell and Scannell are all 24 while the dangerous duo in the back three of Jacob Stockdale and Jordan Larmour are aged just 21 and 20 respectively. Give all of those players another year and a half of development and they could be globally-acclaimed international players, a few of them arguably already have that status.

Despite everything appearing rosy for Ireland, no performances out of the five were perfect and there is room for improvement all over the field. Tactics, personal performances, closing games out, being sensible with ball-in-hand, there are plenty of ways to refine our game and become as ruthless as possible. Thankfully, there’s about a year and a half to go until we’re judged by the rest of the world so let’s keep this one game at a time.