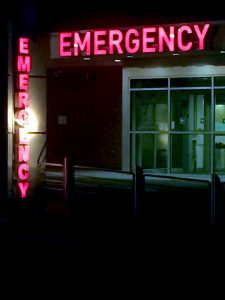 After winning Best Intervarsity at NUI Galway’s recent Society Awards, the newly founded Emergency Medicine Society (EMS) will go on to the national society awards, BICS, later this month. EMS’s ‘Sim Wars’ beat out numerous other intervaristy events held by NUI Galway this year to win the college title and it has since been shortlisted for the BICS award, along with DIT’s DJ society and IT Tralee’s Events society.

‘Sim Wars’ took place on March 10 on campus and welcomed students from every medical college in Ireland. It was the second year of the intervaristy competition and NUI Galway’s first time hosting the event- having taken on the annual competition after winning last years ‘Sim Wars’ in UCD.

After weeks of preparation, 15 teams of medical students came from all over the country to compete against each other win the title. Competitors were presented with simulated emergency situations and were judged by a panel of nine expert judges on their response. The emergencies were presented on both mannequins and live actors and examples included a cardiac arrest, a pulmonary embolism and internal bleeding after a fall. Teams were scored based on skills, teamwork, judgement and communication. The top two teams competed against each other in a live final in the Bailey Allen at the end of the day, where they performed another response in front of 130 members of the public.

NUI Galway entered three teams in the competition, who met weekly in the lead up to the event and worked with doctors from UHG to prepare. Though NUIG performed well, UCC walked home with the prize and will host next year.

Genevieve Callander, auditor of the society, told SIN that the event was a lot to take on but the committee were proud of the competition they put on. “As we are a new society some of the organization put forward challenges,” she said.

“There were multiple heats at the same time which needed to run smoothly so time management was a big challenge for example. But it went well and I think we really improved the event and we are delighted that we are being recognized for this.”

The society hosted over 90 contestants, doubling last year’s number, and got more colleges involved. Genevieve said the event deserves to win the national award because it “not only aimed to help students develop and showcase their skills but also allowed students to get to know their peers from around the country”. The live final also gave the wider community the chance to learn more about what goes on in an emergency department.

NUI Galway societies are nominated for 11 BICS awards in total. The Comedy and SVP societies were also shortlisted for their collaborated event for the best mental health promoting event. The awards will take place in Cork on April 13.