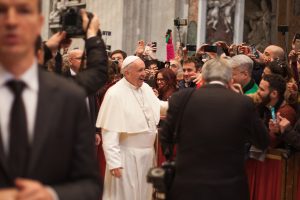 When it was announced that Ireland was to receive the Pope in late August, once again we were reminded of the reality of the ongoing process of Ireland separating Church and State. For decades, Irish citizens have felt the effects of a constitution being filled with heavy church teachings, values and beliefs given a platform so high that it infringes on the choices of people, regardless of their religious or non-religious background. We live in a changing Ireland, and how this visit is handled by those in power, will do a great deal in defining this position going forward.

To correctly handle the Pope’s visit, we must first recognise how Ireland has changed since the visit of Pope John Paul II in 1979. Almost 40 years later, we live in more secular times where Ireland should no longer be defined as “a Catholic country” as it has been on numerous occasions in the past. Today, we are open to others, the various minorities regardless of creed or race in the true honour to the land of a hundred thousand welcomes. I don’t take a position to say that the Pope should not be welcomed or allowed to visit, as that would just be another form of exclusion or intolerance and so, this is not progress. The Pope is a world figure, it would not be in Ireland’s best interest to deny him.

We even saw last month, our Taoiseach rubbing shoulders with US leader Donald Trump for St Patrick’s Day, which was met with a mixed reaction. Just because Trump does not represent the position of the majority of Irish people, this does not mean that such visits of a political nature should be boycotted or denied. The same is true of the Pope. Sometimes respect has to be given to those we may not agree with in order to receive respect back, just as long as we don’t act like something we are not. Maybe it is just a case of keeping up appearances but in my view if the Pope’s visit is to be correctly handled, honesty is key. We need not play false roles in pretending that every person in Ireland prays under a candle to the Pope each evening, because this simply isn’t true and does not represent Ireland in 2018.

Although this will not be a formal state visit, but as part of a larger World Meeting of Families, there are talks of civil protesting of the summer events, particularly from those who are survivors of institutional church abuse. I think anyone in this position should be entitled to do that. We are a mixed country, from those who will celebrate the Pope’s visit here and those who may not even be aware of it. What we are all aware of are the wrongs we have seen from the Church in this country’s past and we derive our own position on people and their background from this. But there can be nothing worse than keeping a fire burning instead of trying to find a new more tolerant way forward. This is not to suggest forgetting past atrocities but progressing in a way that this hurt does not define us as a whole country.

We have marriage equality in this country, we may see the 8th Amendment repealed in the upcoming months. The political space is becoming a secular one, and so the Pope should be treated as a guest to this country like any other, with no entitlements or elitism.

One thing that should remain in our minds however is that recently our previous President Mary McAleese was denied entry to a Vatican meeting for her political views. There is no defending this move from Pope Francis and I don’t think any Irish leader should forget this most recent action when the Pope comes to visit us. It’s true that we have moved on from the days of the Eucharist Congress and 1979 but of course only time will tell how this is going to go down in August. I just hope, that we won’t digress and revert back to an unhappy time of unquestioned Catholicism in forgetting all the progress we have made, both politically and socially.