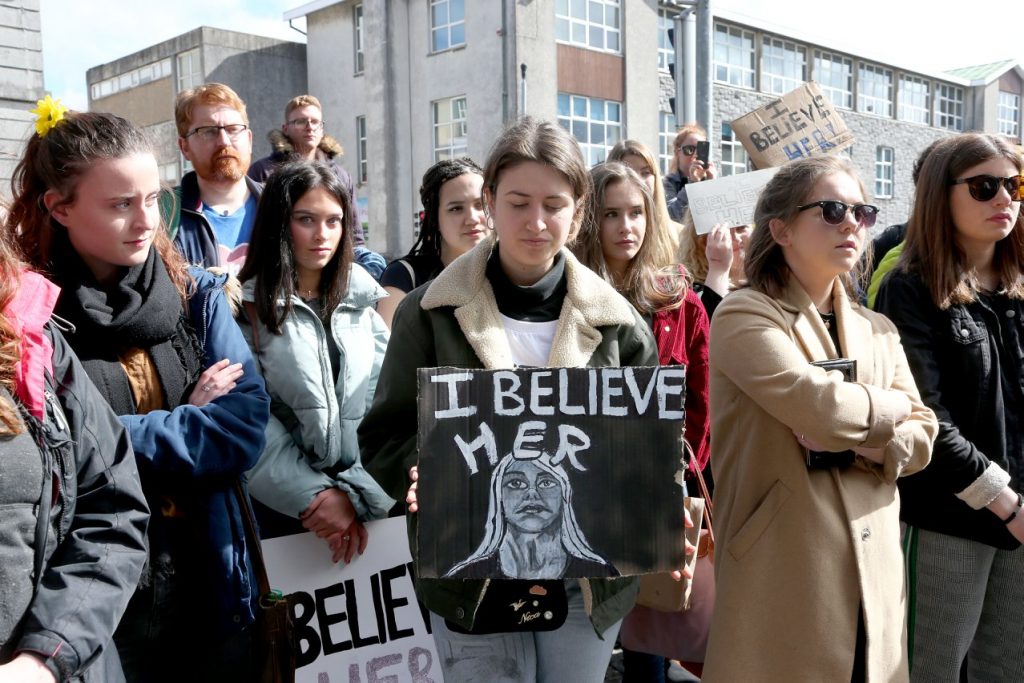 NUI Galway Students’ Union attended the ‘I Believe Her’ rally in Galway on Thursday 29 March to stand in solidarity with any NUI Galway students who have been the victim of rape or sexual assault. Cries of outrage were heard across the country that afternoon as thousands attended rallies in various cities following the acquittal of Irish and Ulster Rugby stars Paddy Jackson and Stuart Olding, along with two other men, in Belfast Crown Court Wednesday 28 March.

The nine-week trial was one of the most publicized Irish criminal trials in recent history and the case became a common conversation topic among Irish students. An abundance of commentary followed the verdict on Wednesday.

All men were found not guilty and the victim’s experiences in court have been condemned by many as the now 21-year-old woman spent eight days being cross-examined by four different prosecutors. While the student’s name has remained anonymous thanks to the legal system, the case has highlighted many difficulties surrounding sexual assault cases. The Students’ Union hopes that this will not deter victims from coming forward.

SU President Lorcán Ó’ Maoileannaigh posted a video on the SU Facebook page yesterday afternoon explaining why the Students Union attended the rally, which was organised by Galway Feminist Collective.

“If that doesn’t send a shiver down your spine I don’t know what will.”

Around 200 people attended the rally outside Galway Courthouse with a sea of signs painted with support for the young woman. The event coincided with other rallies around the country in Cork, Dublin, Belfast, Dundalk and Waterford. Galway Feminist Collective thanked those who came to support the rally yesterday on their Facebook page and commended survivors who spoke at the event.

“It was inspiring to see people of all ages ready to take action to demand change.” the post reads. “We’ll be organising spaces for survivors to come together and also a space for people to discuss community responses to violence.”

Other Students’ Unions across Ireland also showed their support at the rallies yesterday and many have stressed the importance for universities to provide consent classes, such as the mandatory classes Trinity College and Queens University have previously introduced.

Ó’ Maoileannaigh told SIN that the SU wants to stress to NUI Galway students the importance of not being deterred from reporting assault because of the case and that they want to make sure that any victim of rape or sexual assault knows that the Union is there for them and they can seek support at any time in a safe and anonymous environment.

The Union posted the following before attending the rally yesterday on their Facebook page:

“We are here to support students who have been affected by sexual assault and rape. We want those students to know that they are supported, and they are believed.”