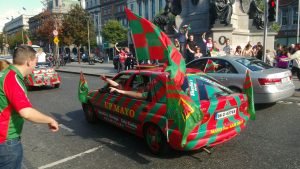 GAA president John Horan recently spoke about his desire to create a second division in the All Ireland Football Championship by 2021. The traditional quarter-finals method has been replaced by the new Super Eights format. The round robin type tournament will be given a three year trial before the Football and Hurling Championships will be up for review at the end of the 2020 campaign.

The idea of an intermediate inter-county football championship was tried and tested from 2003 to 2008. The Tommy Murphy Cup was dissolved at the end of its trial period. The Hurling Championship is currently divided into the Liam McCarthy, Christy Ring, Nicky Rackard and the Lory Meagher Cups. All teams get to compete against teams who are at their level.

The FA in England follow the same type of format. At the top is the Premier League followed by the Championship, League 1, and League 2 etc. Each division comprises of approximately 20 teams and we rarely see any major hammerings in any division. Every team has an opportunity to genuinely compete in every match.

This also done by the LGFA who have four divisions where all four All Ireland Finals take place on the same day in Croke Park. It’s a great family day out for all and something that Horan definitely should be thinking about implementing. The All Ireland Football Championship sees numerous boring games a year. No one wants to watch the reigning All Ireland Champions Dublin take on Wicklow. We all know what the result will be.

On the contrary, such a game may be covered by RTÉ which attracts attention to Wicklow Football and helps fulfil the dreams of all these Wicklow boys of playing in front of the TV cameras regardless of the result. In this vein, speaking on RTÉ’s GAA podcast, Carlow manager Turlough O’Brien is convinced that the second tier would “be a detrimental step” for Ireland’s most popular sport.

O’Brien believes the alternative Liam McCarthy Cups have not been the success people like to think they are. The Clare man alluded to the lack of coverage given to these lower levels of Hurling and can’t see how someone can view it as a step in the right direction.

London manager Ciaran Deely expressed to RTÉ nothing but positivity when discussing the idea. He believes it’s ridiculous that his London side who are currently ranked 32 in Ireland should have to travel over to Connacht only to be blown off the park by the second seeds Mayo. They don’t do it in Hurling or Soccer so why should Gaelic Football be any different.

One would also imagine that teams like London, Leitrim and Wicklow would enjoy the challenge of trying to earn promotion to the top tier. Surely they would feel they have something achievable to work towards whilst putting in the hours on the training ground during the winter?

On the contrary, despite the logic of all this, the public would be deprived of the iconic upsets. Who can forget Longford’s win over Mayo back in 2010. What about Sligo’s narrow defeat to Kerry where they missed a penalty to win the game in the dying stages before Kerry went on to win the All Ireland?

Although these type of games don’t come around too often, they tend to be the highlights of the season when they do, and they mean the world to the underdog who has managed to pull it out of the bag.

Pat Spillane recently spoke about the possibility of players from the likes of Kerry and Dublin transferring to other counties in order to strengthen the weaker sides and make for a more balanced Sam Maguire campaign.

This of course seems a bit vague. Would the player move to the county which he is transferring to? Surely they may need to be provided with employment. What about their clubs? Do they transfer to a club in their new county or do they stick to the parochial rule of playing for your parish?

Perhaps the idea would work better for players who can’t seem to break into their county teams. For example, Following Kerry’s All Ireland triumph back in 2014, Eamonn Fitzmaurice alluded to the numerous players who trained with Kerry who failed to make the squad but contributed hugely on the training ground.

Surely these players could benefit from playing inter-county football for teams like Carlow or Waterford. Perhaps if a two or three year deal was agreed between the two parties the player could then return to his native county then make the breakthrough he has dreamed of.

That said, would this method actually strengthen the likes of Tyrone, Dublin, Mayo and Kerry in the long run? These counties would get to loan their young talent out and then get them back after two or three year’s valuable experience.

A potential con of this system is that unlike Rugby and Soccer, a player represents their home county with pride. The GAA is an amateur’s game but is played to an intensity that matches almost any other sport in the world. Every game is like going to war for your county.

Despite being paid €32million back in 2016, Cristiano Ronaldo’s embaressing dive against Holland in a recent international friendly illustrates the gap in pride and passion between the Irish and English version of football. In the former, such behaviour doesn’t even enter the consciousness of the player. They are at war for their parish and county trying to do them proud. A drafting system would see that beautiful element taken away.

There is no denying that something needs to be done. Personally, I feel that Horan’s idea of a second division is the best. It gives meaning to the season for sides like London and doesn’t take the core parochial element out of the game.