There’s a slight chance you may have heard about the 8th Amendment referendum that is set to take place at the end of May. SIN wanted to know how NUI Galway students felt about the referendum, and what aspects of the issue they cared about the most. So, we sat down with students from both sides to get to the heart of the issue. 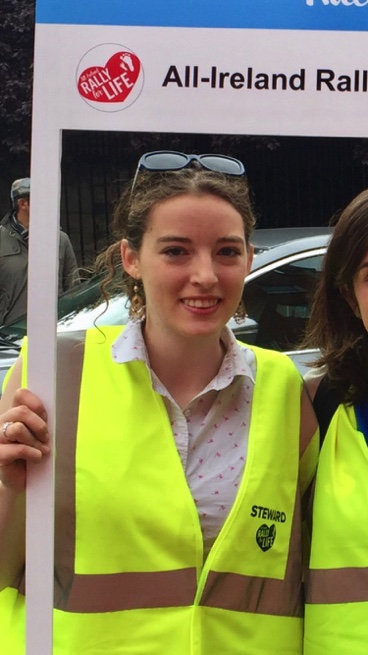 Mia Dovel, Second Year, Biomedical Engineering: This referendum will possibly be the most important thing we are asked to vote on in our lifetime. We’re voting on who gets to live and who doesn’t.  As young people, we should care even more, because the decisions we make today will determine the Ireland in which we are going to live. At the heart of this debate, is love and compassion. We need to support women in crisis pregnancies. The main reason women get abortions is not because they want to, or because they see abortion as a good option; it is because they feel like they have to. They do not have the support they need to carry on their pregnancy. We need to work to provide women with any financial, emotional, or practical help these women need to support their pregnancies. To be clear, abortion is bad for women. The early feminists believed that abortion was the ‘ultimate exploitation of women’. Instead of offering women a violent solution to a distressing situation, we need to offer them love and support. In the discussion of abortion there is one voice that is left out. That of the silent victims, the babies in the womb. The most vulnerable and innocent members of our society are being targeted before they get any chance at life. The 8th Amendment ensures that, provided the mother’s life is not at risk, her baby is given every chance possible. The repeal campaign talks a lot about the woman but fails to ever give value or dignity to the human life growing inside her. While the pro-life view may not appear to be a popular view, there is a silent majority of pro-life people that are beginning to speak out. Young people are out on the streets of Ireland, canvassing and winning people over to the pro-life cause. I am confident that we will win a no vote, and that we will save the 8th Amendment. 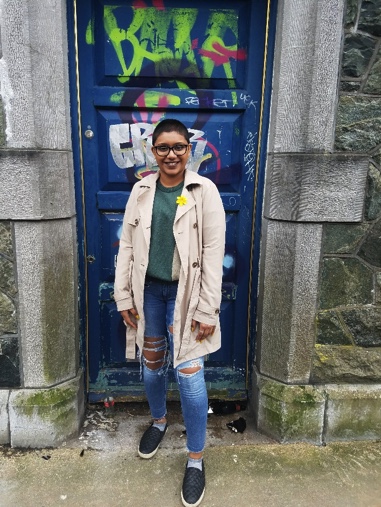 Jess Ramtahal, Second Year Visiting Student, English and French: People pay mind more to the people that use it as a form of contraception rather than looking at the cases of women that it actually impacts and effects, like they don’t care about those stories. They just care about ‘Oh, she used it as a form of contraception, every woman must do that.’ It’s not like that. I got here [to Ireland] and I kept seeing all these things on the news that were like, ‘Repeal the 8th!’ and I was like, ‘I don’t know what that is,’ and then I started looking into it and I started learning about it – I have this ethics class and that’s where I started learning about it – and I learned that you have to prove that you’re suicidal to get an abortion, so that’s when I kind of opened into it. Honestly it made me really mad, because people think women only use it as a form of contraception and people think you can brush it off later. Having an abortion is not a light experience, even to this day it bothers me. It’s not a light experience and people don’t acknowledge that. I think it comes down to older generations and younger generations, and who actually shows up to these votes because there’s so much of the older generation opposed to it. Whereas like the younger generation is like, ‘this is our right.’ 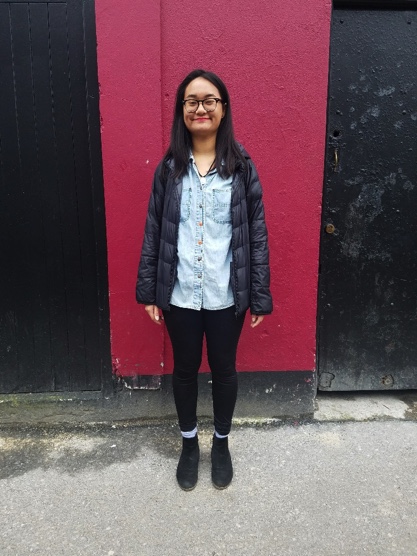 Swellar Zhuo, Third Year Visiting Student, Rhetoric & Writing and Sociology: They [pro-life voters] think it’s a cop out. They think that if they legalize it [abortion] women can be as promiscuous and as scandalous as they can, and then use it as a form of contraception. But in countries where it is legalized their abortion rate has gone down. It’s not an issue of if abortion is right or wrong, it’s an issue of can we make it safe and legal or do you want it unsafe and illegal. I think that’s the fear for anyone traveling abroad or anyone seeking asylum is like, you come here and you realize this option is not available to you. And that that might actually push some people away from coming and experiencing Ireland. I think it’s going to be a 50/50 [vote]. In the beginning we were very hopeful that it would pass because we were like, ‘Well, it’s common sense, you’re expanding women’s rights, you’re giving them a safer option,’ and after talking to people that grew up here their entire lives you realise that there’s actually a lot of people who are socially liberal that have some conservative beliefs in them. And this is one of the issues they hold dear to their heart because they see an unborn child’s right equal to the mother’s life. They see a life to it. I honestly don’t know if it will be passed, and I think if it doesn’t it’ll be many, many years before another referendum comes around. 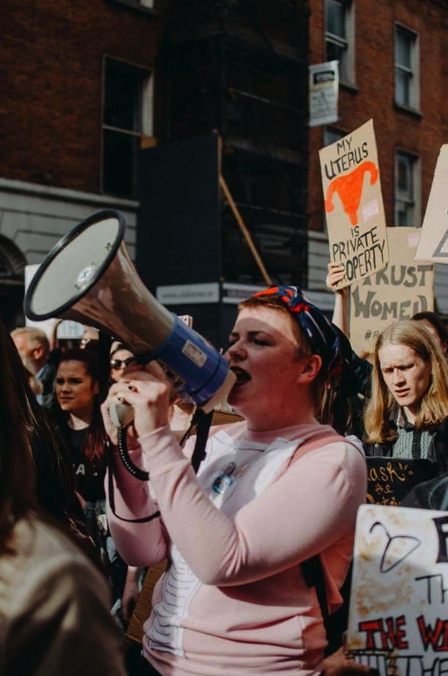 Jessy Ní Cheallaigh, Third Year, Communications through Irish (Cumarsáid): Even if the 8th is repealed it’s going to be a number of years before we get proper abortion care, but it’s such a difficult thing for anyone to do. No one takes the decision lightly. I think that’s something that’s always mis-conveyed in the other side is like, ‘Oh yeah sure women will just be using it as a form of contraception, or people will be having abortions on their lunch break,’ but it’s like no one would ever want to have an abortion, not even the mental trauma behind it, but also the physical pain. Some people have really bad reactions to it, like heavy bleeding. It’s not like ‘I want to have sex without a condom because I can get an abortion,’ no one does that. I would agree that there should be more services for pregnant people, there should be more support for women who are dealing with tough pregnancy. And see that’s the thing that gets mis-conveyed as well is like people think we’re ‘pro-abortion,’ and it’s like yeah we are but we’re also ‘pro-keeping-the-baby,’ we’re also ‘pro-adoption,’ we’re also ‘pro-whatever-you-want-to-do.’ We believe there should be better child services, there should be better maternity care in general, and better treatment if you are pregnant. We totally agree with that as well but at the moment in Ireland there’s none of that. I understand that if it was a perfect world where people could bring up babies without any money that would be great, but it’s not, and that’s just a reality. For some women it just isn’t an option to have a child, it’s not possible. If it forces someone to go hungry or if it forces someone out of their house you know, there’s many, many reasons, and it’s not just money, that’s just one of the reasons it could be. It’s so personal, every reason to have an abortion is totally individual, it is totally dependent on different factors in that person’s life and you have no idea of those factors whatsoever, so how can you say if that’s right or wrong thing to do for her. It’s human rights, women don’t have the same human rights as men because we’re able to get pregnant and that’s what’s wrong. That’s kind of, for me, the basis of it all. 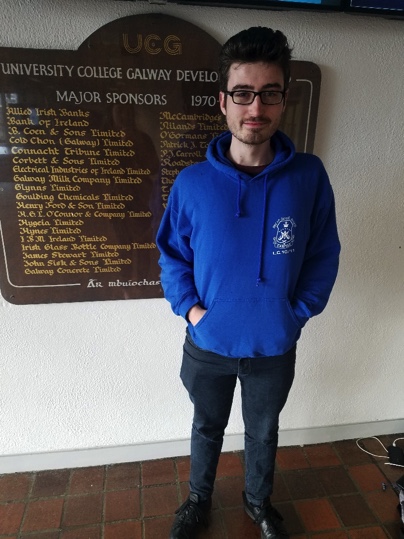 Vinny, First Year: So far what I’ve seen is that younger people want it to pass, they want more rights for themselves I suppose later on, they don’t want to be shackled down by the older generations, which is what tends to happen around, when it comes to politics. You’ve heard about the Pope coming? I think the Pope is coming to reinforce the fact that it’s against the Christian doctrine, there’s the meeting of the families as well. I think the Pope’s visit is very political in that sense, because he doesn’t want it to pass because obviously the Catholic church is against it heavily. But as long as the young people can go vote, we should get it passed. I want it to pass personally, but I try not to get involved too much. 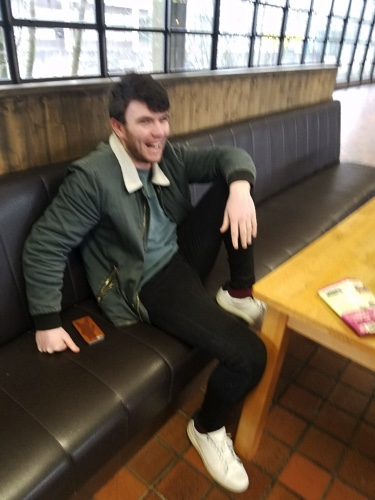 Peter Ennis, Final Year, Business Commerce International with German: It will pass, yeah. [Abortion is] probably the most pressing issue in Ireland for people our age, but probably not for people that are in other age groups. I don’t really know what it means to me, I just feel it needs to be passed, that’s it really. It’s probably more [meaningful] for girls because it relates directly to them, but obviously it is an important decision for everyone to make. 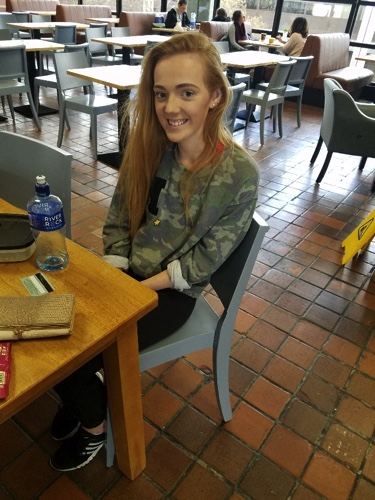 Katie Browne, Final Year, Commerce: I think it will pass, I hope it passes. I think it’s really unfair for girls to have to put up with people making decisions for them. I think it is really important that girls have that decision to make.