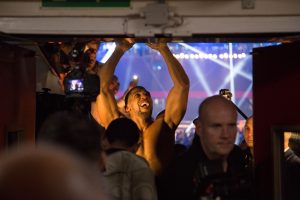 The heavyweight division has caught fire again we are told.

Wilder, Fury, and Joshua, a triumvirate of superstars injecting a shot of pure ephedrine straight into the dead heart of a division that lost its soul somewhere along an autobahn circa 2008 eventually ending up as a roadie for a reunited hair metal band playing a garden centre in Stuttgart.

Joshua leads the cellular rejuvenation, the catalyst for a rapid conglomeration of sparkling neurogenesis, attracting the wild, the addicted and the terminally insane around his pugilistic palace like bees to a broken jar of Manuka honey.

It’s safe to say Joseph Parker won’t have to worry about neurogenesis while he is in the ring with Joshua. Parkers wits need to be in optimal condition to avoid the avalanche of destruction coming for his poor brain.

Think about it. A six foot six 18 stone man wants to repeatedly smash his fists into your face, and not only are you aware of this frightening fact but you feel the same. That’s a form of true love if ever there was one.

Luckily for Parker a good pair of running shoes and a solid guard should be enough to see him exit the ropes without the need of an oxygen mask or a stretcher and possible neurogenetic advances in his future.

The question is can he maintain the pace required to throw the odd punch out of range while running away from Joshua? Can he throw in a few desperate haymakers as the big man’s muscles frantically gasp for oxygenation? And will it be enough to provide a competent semblance of an equal contest?

Parker looked terrible against Hughie Fury in quite possibly the worst heavyweight title fight ever. It was so bad it was broadcast live on YouTube, striving to capture a share of the 9/11 conspiracy market.

Promoter Mick Hennessy stated You Tube was the future of boxing broadcasting, but ultimately the fight failed to go viral on You Tube. Parker looked horribly pedestrian and flat footed against the limited Fury. Yet in a game of boxing bingo we can adjudge Parker may possibly extend Joshua, simply because he has a win over Carlos Takam who provided some stiff resistance to AJ on short notice.

Luckily for Joshua he has the size and appeal to crossover into the land of the mainstream, where potbellied men with delusions of Carlton Leach after a drink or two are more than happy to provide analysis for Joshua’s performances.

Joshua could arrange a fight with a hamster and you can be guaranteed some surging UK grime artist will be leading him out hawking up phlegm into a gold plated microphone, emerging into a heaving stadium as a grey bearded Dizzee Rascal looks on approvingly.

50,000 fans will still somehow enjoy their Saturday night watching Joshua lumber and stalk a thoroughly bemused Parker around the ring.

Each time Joshua pauses to take a breath will give the punters time to get to the bar and back ,as Parker isn’t bringing anything of interest into this contest beyond a World title belt that he has no right to be within 100km of. In times past if sub standard journey men even looked at a world title belt a restraining order would be immediately ordered. But that’s modern heavyweight boxing. Theatre over substance. A soap opera with bad singing, not a ten-episode box set that etches its place in entertainment history and spawns an army of geeks.

On the other hand, Parker may just replicate the Takam approach and make it appear competitive. If Parker can show some intelligent feints and movement and a willingness to counter hard with twos, threes and fours while the big man is gasping for breath, the crowd will get their money’s worth.

Joshua is beatable. He is a muscle drone, functional but rigid. A concoction fresh off the Ivan Drago conveyor belt. He is an evil Bond villain’s idea of how a champion should be constructed.

In short, he is a marketing dream – the PR perfectionism-superior race comments notwithstanding –but he is struggling to mask the technical defeciencies and cardio vascular fragility of late.

Why not strive to shave some of that muscle off?

Either way it’s a Joshua win unless his cardiovascular system surrenders under the strain of all that protein and the big man drops in the centre of the ring like a heroic bullet riddled soldier crawling back to base after a shootout. However there’s no denying these are interesting days in the landscape of heavyweight boxing.