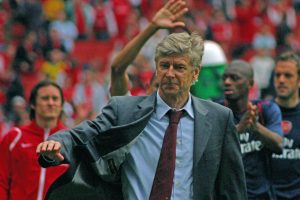 Arsene Wenger has been on the receiving end of four consecutive defeats for the first time since 2002. Having once been recognised as the best manager in World Football, the Frenchman is now expected to finally be relieved of his duties.

Having served the Gunners for 21 years, Wenger has experienced the highest of highs and the lowest of lows. He has won three Premier Leagues and seven FA Cups during this time.

His greatest moment came in 2004 when the club went the whole Premier League season without being defeated. The “Invincibles” will always be imprinted in the memory of every Premier League aficionado. For many Arsenal fans, Wenger’s rule will be remembered as being both the best and worst of times.

Recent years has seen the former Monaco manager receive a lot of justified criticism. The side currently lie in sixth in the table and trail local rivals, Spurs by 13 points.  However, could the impressive showing by the side in the Champions League save Wenger’s bacon?

In terms of what is next for this season, Wenger may still have a chance to stay. In the unlikely event that the FA Cup holders win the Europa League, Wenger may be allowed to honour his contract which expires in May 2019.

Defeat however could mark the end of his time at the North London club.

Having lost the Carabao Cup final to champions elect City and being dismantled by Nottingham Forest in the FA Cup, domestically speaking Arsenal’s season has evaporated. Sixth place will be enough to grant the side another year of fixture packed Europa League football.

On analysing the side’s current form, the team still has ability going forward. Despite the loss of Chilean International, Alexis Sanchez, the prolific Pierre Emerick – Aubameyang is a suitable replacement.

The major issues undoubtedly lie with the side’s defence. Mustafi’s reaction to a push in the back against Sergio Aguero, show just how soft the Arsenal back line has become since Tony Adams and Sol Campbell moved on.

One could also make the argument that Arsenal’s defensive players simply are not good enough. Petr Cech is clearly past his best while Mustafi, Chambers, Monreal and Koscielny haven’t been up to par. One could also argue that Hector Bellerin and Maitland-Niles are overly offensive and fail to focus more on their conservative duties.

Potential additions to the Arsenal backline could be Stoke City’s Jack Butland. Despite experiencing every goalkeeper’s worst nightmare by letting the ball slip through his hands and into the goal in the side’s recent defeat to Leicester, Butland still looks like a potential England no.1.

In terms of defenders, Harry Maguire at Leicester continues to impress as does Michael Keane at Burnley. The aging Vincent Kompany could be brought in to add some much needed leadership and solidity to the Arsenal penalty area.

A new holding midfielder may also be crucial in returning to the top of the English game. The likes of Steven N’Zonzi of Seville or the unlikely steal of Victor Wanyama from nemesis Spurs could make all the difference in finally bringing the glory days back to the Emirates.

Jack Wilshere has played well this year but was recently labelled as “the most overrated player in history” by Republic of Ireland assistant coach Roy Keane. Santi Cazorla continues to recuperate from injury while Granit Xhaka has ignorantly persisted in getting sent off on a regular basis

Up front is the only positive of the current squad. Aubameyang is a world class striker who may actually be regretting his move having been offered to Chelsea by previous club Dortmund. Playing in a similar style to that of Thierry Henry, one would love to see the former front-man manage the Gabon international and oversee his development into a Premier League star.

Lacazette has shown a poacher’s instinct while Ozil’s passing coupled with Mikitarayan’s powerful running, has left hints of what could be an exhilarating Arsenal front four.

In terms of who should take reigns, many may argue that Bould, Henry, Howe and Hasenhüttl don’t have the credentials or experience of managing a top club.

Rodgers performed poorly at Liverpool following the departure of Luis Suarez and both Leonardo Jardim and Antonio Conte have had underwhelming seasons following their respective league wins with Monaco and Chelsea.

If the board take the view that the Wenger football philosophy must be followed, Luis Enrique would undoubtedly be the man to appoint. Having won nine out of a possible 13 trophies in Catalonia he has the credentials.

Unfortunately for Arsenal, Enrique has been reported to have agreed to take over at Chelsea at the end of the season should Conte be fired.

Alternatively, Eddie Howe’s creative style of play at Bournemouth could be a nice fit. He has also got the crucial experience of managing in the Premier League.

One may feel the side need a more pragmatic boss. The kind of guy who doesn’t allow Manchester City to put three past you in consecutive fixtures.

Both Allegri and Simeone have displayed their tactical astuteness by reaching two Champions League finals each with Juventus and Atletico Madrid. Conte may also fit the bill here but he has been continuously linked with a return to international management with his beloved Italy, where he may feel he has unfinished business to attend to.

All in all, former AC Milan, Chelsea, PSG, Real Madrid and Bayern Munich head coach Carlo Ancelotti looks the best fit. His counter attacking style of play saw the Blues win the Premier League and FA Cup double back in 2010.

In doing so, they recorded a record breaking 103 Premier League goals with a further 45 goals manifesting in other tournaments. Ancelotti has also revealed that he fancies a return to the Premier League but has also been linked with a return to his former club.

Ancelotti was recently sacked by Bayern Munich after some poor domestic displays and a dire 3-0 hammering at the mercy of PSG. What better way to bounce back than to rebuild Arsenal football club?

Realistically speaking, Ancelotti, Allegri and Simeone look like the three most suited to the role. Other managers simply lack the experience and credentials required while others are linked with alternative jobs.

The question is, if Wenger is to be axed and that is still a big if, who will have the courage to step up and attempt to end Arsenal fan’s nostalgia of the Highbury heydays? I’m sure this is a topic the British media will be keeping us well informed about throughout the coming weeks and months.