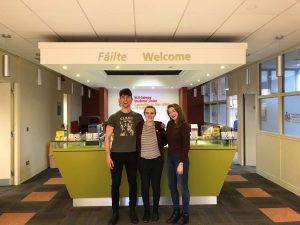 After months of thoughtful planning and a tireless week of campaigning, NUI Galway’s next Students’ Union officers have been elected for the upcoming academic year. As the t-shirts are being put away and leaflets recycled, the three new full-time officers are beginning to prepare themselves for their new roles and shared their excitement about the election results with SIN.

Current Welfare Officer and former Equality Officer in the SU Megan Reilly was elected on 9 March as NUI Galway’s first female SU President in nearly nine years. While there has been female interest in the role in recent years, they did not run winning campaigns.

Megan topped the polls with 1606 votes out of 3049 cast on the day. Other contenders Fiachra Mac Suibhne and John Molony appeared to split the vote, securing 596 votes and 618 votes respectively. Ashwin Ravichandran rounded off the poll with 214 votes.

Megan told SIN that it was “incredible” to be deemed elected.

“I was confident in our ability as a campaign team, but I was never sure of anything. It’s so incredible to be elected, especially to come out by such a margin,” she said. “It really makes you feel like people believe in you – but I couldn’t have done any of it without my team. I’m so proud of all of us and the campaign that we did, it was something so much bigger than just me.”

Even though Megan has plenty of experience with the SU, she said that she was a little nervous at first but is “beyond excited” to take on the new role, which she called the biggest honor of her life.

“The presidency is a really serious position, there is so much going on in the background that students don’t know about and the ultimate responsibility lies with you,” she explained. “It’s a lot to take on but as much as I love my current position, I always felt like I could do more. It’s exciting to be the one steering the ship and ever since the election I know I can do it and I feel prepared.”

Megan’s plans for next year include introducing better food options on campus, advertising part-time jobs for students, improving access for part-time students and focusing on the university’s accommodation crisis. She also wants to strengthen the SU’s social media presence, push for better representation on university committees and fight against the possible student loan scheme. Her main focus right now is to finish out her work as Welfare Officer and to get to know the newly elected SU officers.

“I’m really excited about this new team and to see what we all bring to our positions,” she said. “I want to make everyone in a new position feel empowered and to teach them all I can from my own experience.”

As excited as the incoming President is about next year, she says that she will miss her role as Welfare Officer.

“I love being in this position, I’m really going to miss interacting with students like I do now, but I’m thrilled for this next stage and looking forward to helping Clare take over. Lorcán has been phenomenal as President and he’s already helping me crossover,” she said.

“But I still have a job here in welfare and I have a few more things to do in the next few months. We’re hitting the ground running, but I’d rather sprint anyways.”

Clare Austick, who is currently in a part-time position with the SU as Equality Officer, will take over Megan’s position as Welfare Officer in July. Clare told SIN that it was “absolutely incredible” to be elected.

“I’ve wanted to do this all year and have been planning since September when I took on my part-time position. I really wanted to step up to full time and feel like I can do a lot to help students so it’s amazing to be able to do that,” she said.

Even though the campaigning was tiring, Clare said that it was completely worth it. “Nothing can prepare you for how intense campaigning is but it was so much fun and it was great to get to talk to so many different students and learn about what they want from our union,” she said.

Clare’s focus as Welfare Officer will be on making the SU more accessible for students and implementing more support services around the college along with working on gender equality and equal representation. She plans to start organising awareness workshops, create weekly cultural nights and wants to regularly visit campus buildings that aren’t close to the SU office so students have a chance to approach her.

“My main priority is to let students know who I am and to make them feel comfortable in coming to me about anything next year,” she said. “I’m looking forward to working with the new team and to experiencing being a full-time part of the union.”

The SU’s incoming Education Officer is Louis Courtney, who told SIN he is “absolutely delighted to be elected to this position”.

“I’m really looking forward to being a voice for students who are in any way concerned about issues within education and I hope we can make a few needed changes for students in this university,” he said.

Policies that Louis plans to implement include reducing repeat exam fees, limiting exams to one per day and allowing students to carry over a failed module rather than repeating the year and he hopes to get working on these as soon as possible.

“Our exam fees have increased by €100 in two years which is incomprehensible, it’s an unfair financial pressure on students especially when we aren’t being told where this money is going,” he explained. “It’s important that we get clarity on why our education is costing so much and that we get this cost lowered as soon as we can.”

Eyebrows were raised during the election campaign as a plan to reduce exam timetables to just one per day could prove problematic and considerably lengthen the examination period. However, Louis is still hopeful he can make strides in this area.

“I’m really hoping to get more exam centres sorted early on next year. It’s unfair to expect us to be capable of doing multiple exams in a small timeframe, especially when the centres are out there, we just need to put them to use,” he said.

“The ball is already rolling on trying to allow students to carry on a failed module, so I’ll be focusing on that straight away.”

Louis told SIN that he is very excited to get to know his new team and to start their work in the summer. “I’m really passionate about this job and I’m looking forward to continuing the great work that Andrew has done in this position so far,” he said.

“Our current officers have done an amazing job and I hope that we can carry that on and introduce some great changes of our own.”