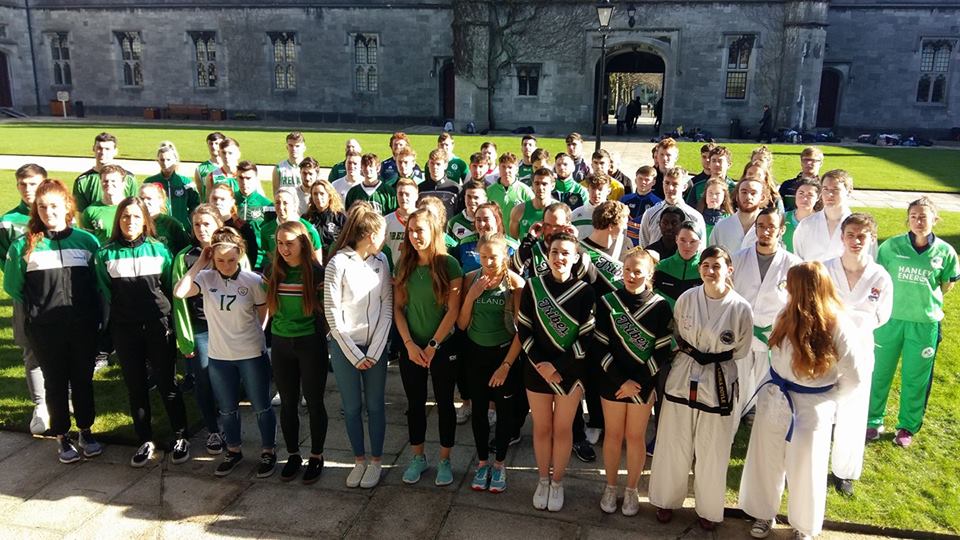 A small sea of green covered the quadrangle here in NUI Galway last Thursday. They were of various backgrounds and genders, the only students on campus wearing shorts on a cold February day.

Floating around in small groups chatting, they impatiently waited for their call from the university’s Athletic Director Mike Heskin.

Many were kitted out already with matches awaiting them off-campus. The student athletes waited happy to be gathered together and to be recognized for their work by the university.

There was Ireland gear and Galway jerseys, cheerleading uniforms and Tae Kwon Do robes. The sports the athletes played varied. There were rowers, soccer players, golfers, runners, All-Ireland boxers and swimmers to name a few.

Members of the basketball team were represented as well as the football team, hurling team, rugby team and more. Many have represented Ireland at an international level and a lot play at an inter-county or inter-provisional level. They all differed in interest but had one binding thing in common: they are the best that the University has to offer to the sporting world.

“Showing the diversity in the university is the aim,” Heskin told SIN at the event.

“There’s a lot more to our university than GAA. We want to show people our world champions as well, our national representatives, our inter-provisional athletes”.

Heskin smiled as he was interrupted by the captain of the women’s rugby team. The girls had a match out in Dangan and they needed to go. When it was explained that the photographer was busy with the University President and would be out shortly, the captain’s reply showed just how seriously the students took their sport: “Fine. But we’re getting the picture taken first and we’re gone”.

After the students took a group photo in their various college, county, Connacht or Irish jerseys, whoever was present from NUI Galway’s 90 sports scholars took another photo in their new NUI Galway scholarship gear.

Even though Connacht rugby players Karen Douglas and Ellie Delaney aren’t on the scholarship program, they said that they were happy to be recognized at the event.

“Our girls teams actually perform better believe it or not, even though you wouldn’t hear about it as much,” Ellie laughed.

“It’s nice to have so many sports represented here, especially our female athletes- it’s great to see everyone come together,” her teammate added.

Rowers Nuala Landers and Sadhbh O’Connor, who represented Ireland at the European championships last summer, commented on what it was like to see the individual athletes come together in the college.

“It’s amazing to see how many students have represented Ireland,” said Nuala.

Sadhbh added that; “Our sport is kind of a minority sport, which is the same for a lot of people here, so it’s nice to be recognized in some way.”

The medicine and science students are on the university’s scholarship program which Nuala said really aids the student athletes.

“It’s really helpful, from physio to help with scheduling. The rowing club is really amazing,” Sadhbh said of the program.

“It’s good to have that bit of support and also to know the effort we put in is appreciated”.

The captain of NUI Galway’s basketball team, Patrick Lyons, had a different view of the scholarship.

“I’ll admit, the scholarship isn’t the greatest in Ireland but it is definitely evolving and changing. And it’s good that the department is doing this today,” he said.

“It’s good to show people that there is more than just typical Irish sports out there. Our club is actually one of the most successful.”

The basketball team are preparing to compete in the All-Ireland semi-final, and Patrick hopes that this will be recognized.

“We don’t play at a tiddlywinks level you know. Around nine of us play at a national level. Basketball is a sport of an international level,” he explained.

As the athletes quickly scattered off to their various classes and practices, the college’s marketing staff and athletic department exclaimed how delighted they were with the photos and turnout.

It’s great to see the university showing how varied NUI Galway’s sporting talent is but Patrick Lyons summed up one thing that the university cannot lose focus of.

“The most important thing for student athletes is that we’re put in the best position possible to achieve success in both sport and the classroom” he said.

“Recognition is only one small thing.”