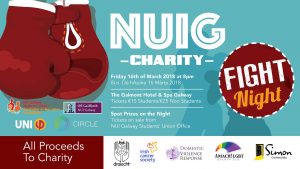 After last November’s grudge fight night against GMIT, the Students’ Union and the NUI Galway Cancer society have lined up another night of white collar boxing in the Galmont Hotel set to take place on March 16.

24 students will put on the gloves and step into the ring on a night which will raise money for the charities Amach LGBT Galway, Draíocht, Domestic Violence Response Ltd., the Irish Cancer Society and the Simon Community

The night will be an all NUI Galway affair with the competing boxers all having no previous experience, although the NUI Galway Muay Thai club will also be staging two fights with more experienced fighters.

Maynooth University were initially meant to be involved on the night also, but as co-event organiser Sean O’Dea mentions they had to pull out.

“Whatever way the dates were falling with availability in the Galmont there was no night that would suit both colleges really, so Maynooth were like ‘look we don’t want to half commit to it,’” he told SIN.

Sean O’Dea was quick to note that it was not difficult to find willing volunteers, as several wannabe pugilists put their names forward; “I literally put up a form on Facebook and 100 and something people threw their names in the hat.”

The fighters are currently being put through their paces by Oughterard trainer Stephen Molloy, who has experience training the Irish national team and is the father of Kieran who recently became a senior National Champion. O’Dea described Stephen Molloy as a “serious trainer to have on board”.

The boxers will have been training for five weeks doing two sessions of two hours a week by the time March 16 comes around, and the participants’ preparations are said to be going smoothly so far.

“You would be surprised, people come along very quickly. It takes a while for things to click, but by week four or five everything starts clicking into place and you can really see huge improvement,” commented O’Dea.

O’Dea will be hoping to build upon last semesters fight night against cross city rivals GMIT, which he thought went pretty well.

“It was definitely different like, coordinating it was a bit more difficult with the two colleges, but I think overall it was a success,” he said.

However, he still believes there are ways they can improve the event this time, with him referring to how the timing of the night is particularly important.

“It was  week 12 last semester, so the timing wasn’t great, but you learn from these things. People were in exam mode so they were a bit cautious to cut into their study time.”

O’Dea finished by saying; “everyone really enjoyed the experience last time though so I don’t think there was any regrets thankfully”.

The NUI Galway Charity Fight Night will take place at 8pm on March 16, and tickets can be bought from the NUI Galway Students Union office for €15 for students, and €25 for non – students.