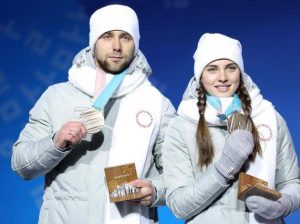 Formally charged by the Court of Arbitration for Sport, Krushelnitsky is likely to be stripped of his mixed doubles curling bronze medal won alongside his wife Anastasia Bryzgalova.

168 Russian competitors entered the Olympic games despite the country’s condoned doping programme. This state-sponsored doping programme has caused much controversy, but Krushelnitsky’s team mates believe the athlete is innocent.

Meldonium is typically taken by athletes to increase speed and strength and wouldn’t necessarily be considered useful or needed for curling.

“We were all shocked when we found out,” said Viktoria Moiseeva, a fellow team mate.

“Of course, we very much hope it was some kind of mistake. With us, it’s not faster, higher, stronger; it’s about being more accurate. I can’t imagine what kind of drugs you could use in curling … so it’s very hard to believe.”

“I spoke to a person who previously headed the anti-doping laboratory, and he said that curlers don’t need meldonium,” said Russian Olympic delegation spokesman Konstantin Vybornov. He accused the media for running “misleading” reports.

Krushelnitsky claims he was spiked. He suspects another team mate that was not chosen for the Olympics may have done it at a training camp before flying to South Korea.

According to the Russian curling federation president Dmitry Svishchev, all Russian curlers tested negative on 22 January before travelling to South Korea for the games.

Svishchev said: “It’s a strange story. It raises a lot of questions.” He believes only “a crazy person” would take banned substances right before a competition, especially the Olympics.