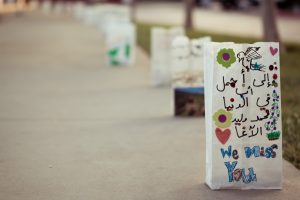 The fourth annual NUI Galway Relay for Life in aid of the Irish Cancer Society is set to take place on Thursday March 15.

The event will take place at the Kingfisher Gym this year.

The relay aims to raise cancer awareness and also raise funds for the Irish Cancer Society.

NUI Galway Cancer Society are hoping to build on the success of last year’s event which raised €10,000, and the NUI Galway relay has generated over €21,000 since it began in 2015.

The event itself involves teams made up of five to 20 people, and one person from each team must be running on the track at all times.

Before that however, the relay begins in a very special manner as PRO of NUI Galway Cancer Society Lidia Shafik told SIN.

“You have the survivors’ lap, where we invite cancer survivors to come and they start off the whole relay by doing a lap,” explained Lidia.

Each team will also be doing something to fundraise around the track on the night.

“They are either doing a bake sale or they have drinks set up, or some of them are really creative like there was a whipped cream game last year,” said Shafik.

Shafik continued; “[This year] we have a lot more games going on. We have this big giant Jenga thing coming in and we have these inflatables coming in, so we’re going to need a lot of space”.

Other activities will include competitions, film screening and the candle of hope ceremony. Lidia believes that those thinking of participating will have an enjoyable time.

“There will be a lot of fun, a lot of games, and a lot of laughter,” she said.

Work has also been done on the promotional side in an effort to improve the event.

“We have a lot of promotion going on so we are hoping to have an even bigger turn out and raise even more money. We always have so many sponsors. Dunnes [Stores] gave us €500 this year and we are still working on getting so much more,” revealed Lidia.

Lidia also explained how the money raised will be used by the Irish Cancer Society.

“The Irish Cancer Society do two main things. The main thing is that a lot of the money is going towards research funding in hope of getting a cure. The second thing is that they also provide practical support for cancer patients”.

To get involved in the 2018 NUI Galway Relay for Life, people can contact the NUIG Cancer Society Facebook page or they can sign up using the link on the Facebook event page. People can also sign up at the SocsBox, or at Smokey’s every Thursday from 11am – 2pm.

The cost is €10 per person with an initial €10 registration fee. Food and a Relay for Life t-shirt are included within the cost.