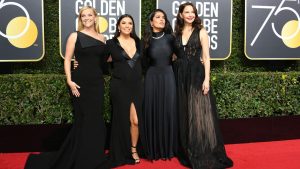 So far, this year’s entertainment award ceremonies have been far less colourful than usual- but they have been a lot more interesting. The latest protest occurred at the BAFTA awards, where countless celebrities adorned black clothing as they strutted down the red carpet. The bleak colour scheme was used as a tool to unify Hollywood’s finest. A colour concentrated on darkness but inspiring hope to illuminate.

Since the start of the year the women of Hollywood have tirelessly campaigned to bring the #MeToo campaign full circle and have transformed the plea to a demand with the #TimesUp movement. Mirroring the Golden Globes on this side of the Atlantic, over 190 women from the film industry signed and published a letter asking attendees of the BAFTA’s to wear black clothing to the event.

With around $21 million raised for the American Times Up legal defence fund, British and Irish actresses were hoping to spread the campaign this side of the pond. The celebrities wrote that they wanted to “use our power as communicators to shift the way society sees and treats us”. The aim was to use the uniform as a demonstration of solidarity and to redirect focus from the women’s outfits to their voices.

Indeed, at the awards far less attention was focused on what was covering the women’s bodies. Few were asked who they were wearing, there was no best dressed, many wore long sleeves or high necks, some even opting for gloves and wraps. The red carpet was a sea of black and the women, who are usually framed as competitors on the red carpet, looked as unified as the men usually do in their tuxedos.  It was a small stance that has garnered massive attention.

However, many have disagreed with the celebrity’s means of protest and some with the Times Up movement in general. It’s been accused of being limited in scope, a group of powerful, wealthy, mostly white women wearing beautiful black gowns instead of beautiful colourful gowns.

Indeed, many of us at home watching the event couldn’t help asking; what good does this do for me? What will Angelina Jolie strutting around in an expensive black gown do to help the average woman? The one who gets her backside squeezed on the bus or gets her looks commented upon at school or work. Who can’t walk down the street without her legs covered or have a few drinks without feeling vulnerable. What about the women fighting to get into board rooms? Those who break their backs at work and simply expect to be paid the same as their male counterparts? All of us, who are fighting so very hard to be seen as an equal in a world where men dominate. Where crude comments are denounced as locker room talk and women are shamed for standing up for themselves in a court room.

It angers us, of course it does. But sometimes we are so masked by our anger that we don’t appreciate the small gestures that are starting us on our way to equality – such as celebrities wearing plain black dresses to the biggest events of their careers. Many of the actresses brought female activists as their dates on the night, and these women got to talk to reporters and have their voices heard. Isn’t this a start? Aren’t we all talking about it? Aren’t these women being heard?

Along with the film industry letter before the BAFTA’s, a letter written by female activists working with the movement was attached. They wrote, “We know that these conversations are not new and that these stories are not exceptional  but the women in the entertainment industry that have spoken out have helped push issues such as sexual harassment into the public consciousness in an unprecedented way” and this is true.

If one unknown woman had spoken out about Harry Weinstein she might have been ignored, but when a list of powerful women spoke out together, he was shamed. There is power in numbers. And there is even more power in celebrity. By these women speaking out and making their male counterparts uncomfortable, like they have succeeded to do at the BAFTA’s and Golden Globes, we have made progress.

The women admitted themselves in the BAFTA’s letter that “perhaps Times Up seems a million miles away to you- started by a group of women with privilege but the truth is, we are all workers and whether or not we’re in the spotlight or the shadows, our voices matter”.  So instead of brushing off the small action they took on the red carpet, we should celebrate that while we haven’t changed the reality, we have started to change the mood, with the help of some very powerful people on our side. As Shonda Rhimes said of the movement: “If this group of women can’t fight for a model for other women who don’t have as much power and privilege, than who can?”

Right now we are at a crossroads, where we can either use these small gestures to help us or we can laugh at them and ignore the efforts. I’m choosing to say yes to the Times Up Movement, with the hope that, as the women wrote, “if we truly embrace this moment, a line in the sand will turn to stone”.