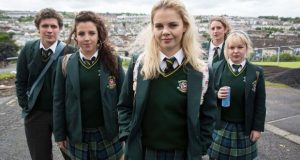 Derry Girls has taken the small screen by storm. Written and produced by Lisa McGee, a Derry native, the show has received rave reviews from viewers and critics alike. But what is it about this female-led show that is a success? There have been many tv shows and films headed by women that have fallen far short of our expectations.

Most notably, the Ghostbusters remake received fierce criticism from online trolls, with the trailer being the most-disliked in YouTube history. The critics had a mixed reaction. You would think that with a stellar comedy cast such as Melissa McCartney, Kate McKinnon, Kristen Wiig and Leslie Jones, the film would have been a success. Why wasn’t it?

The problem lies in the script and plotlines. You can have the most brilliant cast, but if they have nothing to work with, they can’t do much. The jokes have to be hitting the mark every time and the plot has to be captivating. Audiences won’t tolerate mediocrity, especially when most people consider going to the cinema expensive. Ghostbusters fell flat because the plot didn’t draw the viewer in. That being said, there are some incredibly successful female-led TV shows.

My Mad Fat Diary, produced by Channel Four, had brilliant actors, soundtracks, production and plot lines. The show dealt with serious issues, such as mental health, teenage relationships and how difficult it is to be a young woman. Sharon Rooney gave a brilliant performance as Rae Earl, and it won her a BAFTA nomination.

The show was based on a book by Rae Earl, and she was a writer on some of the episodes. The show isn’t afraid to show the nasty side of femininity, teenage friendships and relationships. Creating three-dimensional female characters is how to make women-driven shows more successful.

Derry Girls has an all-female lead cast, and the show is a roaring success because of Lisa McGee’s brilliant writing. She is depicting her own experience of growing up in Derry during the Troubles. This setting pulls people who aren’t interested in the inner-workings of a 16-year-old girl’s life into the story.

The Troubles are presented in a refreshing way, with the characters in the show viewing a bomb on the bridge as an inconvenience. The juxtaposition of the girls chasing a dog around Derry in their uniforms and the armed British soldiers searching cars and patrolling the area is so effective at getting across the everyday reality of living in a conflict zone. Combine this with sharp, witty Irish humour and you have a successful show.

Another small screen success is Gilmore Girls, which managed to get a Netflix revival after several successful seasons. The quips and rapid back-and-forth between mother and daughter Lorelai and Rory added to the show’s quirky feel. Gilmore Girls proved an incredibly female-centric show can be successful. Also, Rory’s romances were not the focus point, the writers always ensured they explored her education, career and female friendships in equal measure.

Leading ladies can also succeed on the big screen, and Judd Apatow’s Bridesmaids proves this. A stellar comedy cast made audiences laugh out loud, and the jokes were just jokes – not necessarily feminine jokes. The scene when the bridesmaids all get food poisoning might seem unladylike to some, but would never have been deemed out of place in a male comedy. The film also deals with the intensity of female friendships in a comedic way, rather than in a catty, dramatic way. This was quite a novel concept, especially for Apatow who is most known for male-driven comedies like The 40 Year Old Virgin.

For female-led projects to succeed, we need well-rounded, well-written female characters who have dynamic relationships and exciting plots. Not too much to ask, surely?