The title of “The British Invasion” is given to the specific genre of music in the sixties that influenced the British and American culture both socially and creatively. With the arrival of British pop bands like The Beatles and The Rolling Stones into America at the beginning of this decade, their musical influence grew faster and wider than ever anticipated. Taking inspiration from late-fifties style and music like Elvis Presley and Buddy Holly, the British Invasion genre aimed to go even further with its influence.

With social revolution and war being a prime focus for this generation, it had major effects on music and fashion. With the death of President John F Kennedy, the Civil Rights movement, and America’s involvement in the Vietnam war, all of these struggles were reflected in the music of the time. Reflecting on sixties music allows the current generations to gain an insight into the mindsets of the people during these movements: honest, passionate and uncensored.

Music is also a way to show the style and fashion at any given time and the sixties were no exception. One of the biggest influencers in this genre is undisputedly The Beatles. Beatlemania hit America on 7 February 1964 and changed the culture of both the USA and Britain from that point onwards.

Although their extensive compilation of music gained them mainstream popularity, The Beatles also became icons of sixties fashion. The “mop-top” haircut sported by the members of this British band became an iconic look for the young generation of the time. During the psychedelic era of 1967/68, the height of Beatlemania, much of their vibrant coloured outfits, matching suits and floral patterns were popularised. “Beatle boots” which were ankle height with a pointed toe became a key staple in many young people’s wardrobe. In the Los Angeles Daily News article 10 ways the Beatles changed American Culture, their style was considered a main inspiration for the 70’s glam rock era, a look discussed in the previous issue of this newspaper.

The Rolling Stones were also big contenders in the music and fashion world and considered big influencers of glam rock. Linked with psychedelic rock, this British band were forever pushing the boundaries of style and music.

In 1964 The Rolling Stones had their first American tour and began their success across seas. Mick Jagger the band’s lead singer expressed his understanding of the link between fashion and music and made reference to that in an article by Alex Williams in The New York Times. The Rolling Stones took inspiration from gender blurring looks fashioned by the Irish poet Oscar Wilde. The band also portrayed a wilder style to the suits and matching looks common to the time. Talking about style, Mick Jagger stated that the band were “not just five blokes in blue jeans going on with a lot of amps, you know what I mean?” His awareness of fashion indicates why The Rolling Stones are such an important aspect of fashion and music today. Their work and style can be linked to inspire later musicians like David Bowie and Iggy Pop.

Alternative bands like The Kinks and The Who made their own impact both musically and within the fashion world. In reference to The Kinks guitarist David Davies, he expressed distaste for the commercial and stereotypical styles of the sixties as did majority of the band members. This disassociation is evident in their satirical song “Dedicated Follower of Fashion”. However, The Kinks still took centre stage when it came to creating vintage looks for their performances. The British band went against the “mod style” at the time and delved into a “dandified” look, a similar style to the Victorian era. Interestingly, Davies can be seen wearing double breasted shirts and victorian style attire in many of their performances becoming a reluctant style icon of this time. 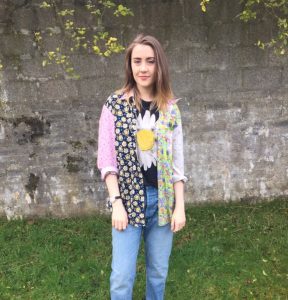 The two looks we have created are inspired by separate style elements of this genre. The first is more stereotypically known as a sixties style and a lot more hippy oriented. The blue jeans, floral top and colourful shirt all scream “Age of Aquarius”. The collaboration of bright colours is inspired by looks from The Beatles and The Rolling Stones. The vibrant and eccentric colours are also believed to correlate with the social uptake in drug use at the time. This alternative look, although maybe not the stereotypical Swingin’ Sixties get-up, was quite a strong theme amongst British bands. 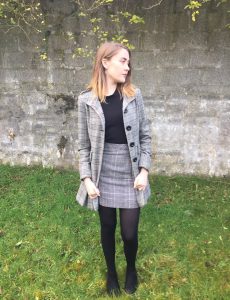 Matching clothes and suits were also go-to looks for many of these bands including the Hermans Hermits and the Kinks. With that in mind, the skirt and checkered jacket paired in this second look represent this form of fashion. The presence of the black Chelsea boots also make a link to the “Beatle boots”. Matching suits and outfits are one of the biggest elements for inspiration from these numerous bands and unmistakably is a pretty great look!

The sixties were a time of social change and pushing boundaries both socially and creatively, as reflected in its music and fashion. Once again the connection between the two is undeniable. The two fashion looks utilised key elements of this genre to create inspired and modernised outfits. It is clear that through music and fashion we can get an honest insight into the past and how it can effect the world creatively today.