“Lost Looks” is a new feature in the Lifestyle and Fashion section of SIN. These articles will be dedicated to studying musicians that influenced a specific genre and their impact on fashion during this time. The purpose of these pieces is to show a connection between the music in an era and its effect on fashion, questioning whether the two go hand in hand or if they are completely segregated. Following this, a look will be created inspired by the week’s theme, taking the key characteristics of the fashion and giving it a modern twinge. This week’s genre is 70’s glam rock which will explore the history of the most influential artists at this time and their place in fashion.

As the style and music from the “Age of Aquarius” sixties ceased, the 70’s sought to push its boundaries further both musically and artistically; for many this meant revolutionary fashion and style. Thus, 70’s glam rock was born. Thrusting in certain characteristics and styles from the previous vibrant sixties, 70’s glam rock brought colour, vibrancy and most importantly, glitter. Also known as “glitter rock”, 70’s glam rock saw the birth of glitter makeup, platform boots, leather body suits and everything eccentric.

It is impossible to discuss this genre of both music and fashion without mentioning its most prominent influence to this day, David Bowie. Although famous for his musical talents, it is difficult to study Bowie without exploring into his obscure fashion sense. In Cherish Marasigan’s article The Evolution of Glam Rock Fashion, Bowie like other artists such as Suzi Quatro, Iggy Pop and T. Rex Marc Bolan impacted the world in two forces: through their style and music.

Androgyny, “gender bending” and eccentricity were the composing trio that made this genre stand out in an ever changing artistic world. Male musicians such as Bowie, Iggy Pop and T. Rex Marc Bolan are specific examples of this genderless fashion, who comfortably portrayed themselves wearing make up, heels, glitter, dresses – all stereotypically feminine styles. A quote by Iggy Pop addressing this shows the careless and free spirited attitude towards fashion at this time possibly influenced by the sixties: “ I’m not ashamed to dress ‘like a woman’ because I don’t think it’s shameful to be a woman”. This could be argued to be very ahead of its time because of its controversial ideas and thoughts are still relevant today.

Suzi Quatro, a 70’s glam rock musician who played a significant role artistically in this period is also well known for her iconic looks. Her fashion often contrasted with the feminine style of David Bowie and Iggy Pop, alternatively portraying herself in more masculine fashion; leather jackets, jeans and her famous ragged style hair. Her look and music influenced other famous artists like Joan Jett and Siouxsie and the Banshees as mentioned in an interview with Lucy Hall in the Culture Rock Magazine. More current to this, her hairstyle was an inspiration for the Friends character Rachel in the earlier seasons, known for her choppy, layered bob. Evidently, the influence this 70’s glam rock musician had on fashion lingered on for many years after forever being rediscovered to inspire more generations.

From this musical genre and style brought post-modern glam rock with famous bands such as KISS and the New York Dolls who took the 70’s look to a somewhat more aggressive, darker toned level while still maintaining the eccentric, gender bending assets of glitter rock. This progress is relevant as it inspired more modern genres such as hair metal and glam punk that followed years later. 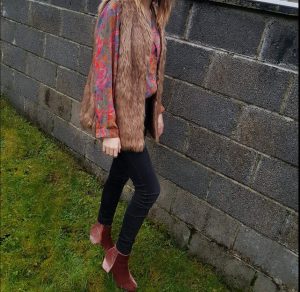 The 70’s glam rock inspired looks given in this article were encouraged by the dominant characteristics of the fashion such as colour, platform boots, leather and vibrancy while adding a personal and modern touch. The first look was inspired by early 70’s glam rock like Bowie or the British band Wizzard. The floral shirt purchased in a charity shop for six euro gave the colour and vibrancy so commonly associated with this genre. Paired with a faux fur vest from Penneys, it reflects the mixed materials and eccentricity of glam rock looks. This was followed by black jeans from Next giving a more modern edge to the look finishing it off with, of course, pink suede platform boots from Penney’s. 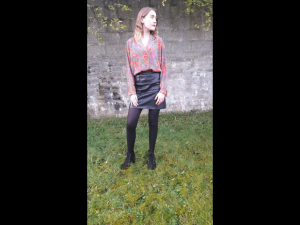 The other picture included the previous shirt but was paired with black laced heels and a leather skirt to portray the rock side to this style, more similar to that of Suzi Quatro who famously styled a full leather jumpsuit in her performances. Consistently, it could be a look that transitioned into post glam rock, with inspiration from KISS and the New York Dolls.

Both looks incorporate elements of this 70’s glam rock genre that could definitely be modernised into a fashion look suitable for today. Although certain aspects like full leather jumpsuits (could you imagine the sweat?) and parachute pants debatably should never be brought back into fashion, the past both musically and through its style have many concepts and ideas to offer the present day.

A final note on the connection between music and fashion specific to 70’s glam rock as has been discussed: although these artist like Mott the Hoople, David Bowie, Wizzard and Suzi Quatro to name a couple have made their name through their music, it would be naïve to dismiss their impact on fashion during this time also. Even today, musicians can delve into the fashion world fluidly, releasing lines of clothing that actually sell. The influence of music goes far beyond that of lyrics and chords and the 70’s glam era was no exception.