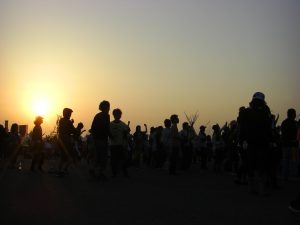 It’s January and with nothing but lectures, assignments and the Galway rain to look forward to, why not plan ahead and suss out which musical festival you’d like to experience in the summer months?

Reward yourself after final exams and kick off summer 2018 with an electronic bang at Life Festival. Not for the faint-hearted, Life is a non-stop party that will keep you dancing all night long. During the day the infamous lake makes for the perfect chill-out spot to laze about or go for a refreshing swim while the nearby stage plays house and disco music. As the sun sets, be sure to venture among the variety of stages to get your fix of pulsating techno and dance music. Headline act Fatboy Slim has already been announced and is sure to blow your socks off.

Forbidden Fruit is perfect for music lovers who perhaps aren’t looking for a mucked-up camping weekend. The six colourful stages showcase a wide range of music, comedy and art inside the grounds of the Irish Museum of Modern Art, giving an authentic festival experience in Dublin city. This year’s headline acts include The War on Drugs, Warpaint, Bonobo and Bicep amongst many others and more are yet to be announced. For those who want to continue the party and keep dancing through the night there will be a number of official after-parties taking place in bars across Dublin, so be sure to keep your eyes peeled for more information.

A wonderland of all things strange and unusual, Body&Soul has so much more to offer than what’s on the line-up. Relax in a hot tub in the psychedelic forest, sign up for the Love Olympics and become a sock wrestling champion and of course don’t forget to get your glad rags on for the annual masquerade ball which takes place on the Saturday night. Don’t fret if you end up losing your mates amongst the madness, the positive vibes which radiate through the festival brings people together and you’ll probably form a quirky new festival family at some point during the magical weekend.

For those sticking around Galway for the summer the spectacular Galway International Arts Festival is not to be missed. Watch the city come to life through a series of concerts, theatrical performances, visual art displays, comedy shows and much more. A rare must-see performance by the entrancing electronica artist Caribou at the Big Top is guaranteed to transport you to another dimension.

Greatly anticipated Knockanstockan festival returns this year after taking a brief hiatus last summer and being sorely missed by festival-goers across the country. If you are keen to discover new music, then Knockanstockan is the place to be since the festival prioritises giving a platform to the lesser-known homegrown talent often neglected by mainstream music festivals. So, let your ears guide the way as you discover some beautiful hidden gems and have an adventure while you’re at it. The overwhelming craic at Knockanstockan promises to leave bellies aching and voices lost after a weekend full of laughing and singing with friends and strangers alike.

The biggest national celebration of Irish culture, the annual all-Ireland Fleadh Cheoil comes to Drogheda this August for a week full of traditional tunes and bountiful craic for all ages. Immerse yourself in the festivities by pulling up a bar stool, clap and sing along to the music sessions or even take out that rusty tin whistle you haven’t played in years and try your luck joining in. Be sure to check out the buskers and dance through the streets of Drogheda as you make your way from one bar to the next where you’ll be sure to find Ireland’s most talented musicians.