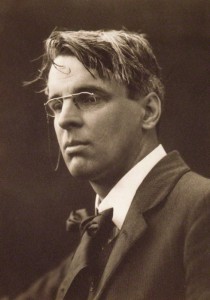 Yeats and the West exhibition is open until December

‘Yeats and the West’ brings an exhibition showcasing some of William Butler Yeats’s greatest works which are associated with the West of Ireland.

This extraordinary exhibition of ‘Yeats and the West’ is currently on display in NUI Galway’s Hardiman Research Building, located next to the foyer of the library. Admission is free, and the exhibition remains available until December 2015.

The exhibition was an important part of Culture Night which recently passed, with the public experiencing tours of the exhibition with curators Adrian Paterson and Barry Houlihan.

‘Yeats and the West’ explores the influence the West of Ireland holds on the writing of Yeats. The West of Ireland possesses a rich and unrivalled landscape which is largely represented in the lines of Yeats’s most famous poetry.

Yeats was a key figure in the cultural and literary revolution which took place in Ireland a hundred years ago. The exhibition looks at how 20th century literature was shaped by Yeats’ love of the West. Yeats had a strong connection especially with the western counties of Sligo and Galway. He widely travelled the landscape of the West, admiring its rural beauty. Yeats was happy to spend most of his life in the West, and chose his burial place under Benbulbin in County Sligo.

The exhibition displays several of Yeats’ poems in large print, along with photographs of Yeats and the areas which he wrote on and loved so dearly. Within glass cases, the exhibition contains a mass of exclusive material.

‘Yeats and the West’ showcases first edition copies of Yeats’ books, The Wandering of Oisin and Other Poems (1889), and The Secret Rose (1897). The exhibition also includes a display of first editions copies of Cuala Press books, from Yeats, Lady Gregory, and Frank O’Connor.

The exhibition contains plays which were placed into the Irish theatre scene and abroad by Yeats’ influence. Copies of the Playboy of the Western World are on show and information on how Irish literature and stories spread as far as Hollywood is documented. ‘Yeats and the West’ also includes descriptions of the successes of Yeats’ brother and later family. Yeats’ exemplary literary talent and emphasis on the West of Ireland had a positive influence on his nearest companions.

Yeats had a particular connection with Galway, especially through his friendship with Lady Gregory. Lady Gregory’s estate at Coole Park was inspiration for many of Yeats’ poems, such as ‘Into the Seven Woods’ amongst others. Yeats, like Lady Gregory, was in love with the large gardens of Coole Park. It was here at Coole Park where Yeats and Lady Gregory worked on some of their most successful projects.

Plans for an Irish Literary Theatre to set up the first Irish theatre scene, the Abbey Theatre, were conducted at Coole Park. It was their initiative which made Dublin a centre of theatre, where an accurate representation of Irish identity and reality could be shown. Coole Park is located in Gort, County Galway and remains open to the public, and is widely sought as a source of inspiration for writers.

Yeats lived in County Sligo in the West of Ireland for the majority of his life. The rural beauty of Sligo was his inspiration for one of his most famous poems, ‘The Lake Isle of Innisfree.’ He also appreciated the beauty of County Leitrim, and wrote his poem ‘The Stolen Child’, based on the area surrounding Glencar Waterfall.

Although Yeats was born in Dublin and travelled far across Europe and visited the US, he chose his burial place outside Sligo town. Yeats wrote his wish to be buried and his preferred epitaph in his poem ‘Under Benbulbin.’ This shows his love of the landscape of the West of Ireland.

‘Yeats and the West’ also focuses on the historical developments which occurred as Yeats wrote on the West of Ireland. The upcoming centenary of the 1916 Rising holds particular significance in his poetry as he was a witness to the events of Easter 1916, and does much to capture the experience in his poetry.

1916 had a profound impact on the people living in the West at the time. Many of the images or ideals we associate with the 1916 Rising today can be sourced from the words of Yeats. The language and literature of the early 20th century increasingly created a thirst for change and commemoration.

The ‘Yeats and the West’ exhibition highlights the importance of Yeats’s connection with the West of Ireland and the influence this had on his literature.

‘Yeats and the West’ will be open until December 2015 and the exhibition can be seen in the Hardiman Research Building. Admission is free.