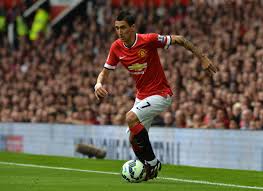 While games at Old Trafford this season have left little to the imagination, last night’s encounter with Arsenal was not lacking in controversy. United’s record summer signing was dismissed after two bookable offences in quick succession.

The first came for simulation, when the 27-year-old hit the turf after coming under pressure from Aaron Ramsey. The second card came seconds later for a tug on the shirt of referee, Michael Oliver, after the Argentine tried remonstrating with the official.

Louis van Gaal made his feelings clear on the matter, shortly after full-time.

“I think he’s touched the referee and that’s forbidden in every country, so he has no excuses,”

Usually one to defiantly defend his players, Van Gaal could not excuse the inexcusable this time.

“In Spain, he knows that he doesn’t touch the referee, but that is also in his emotion.” Van Gaal said.

Di Maria is set to serve a one-match ban and escape any retrospective action, as the grab was deemed not to be violent conduct. He will miss Sunday’s Premier League clash with Tottenham at Old Trafford.

Di Maria can consider him lucky, earlier this season, the FA handed down a 3 match ban and £3,000 fine to Norwich defender, Martin Olsson, after he too laid hands on a referee in an apparent push last August.

Recent incidents of touching, grabbing or pushing referees now calls into question the FA’s and FIFA’s rules on the matter. FIFA’s guidelines on cautionable offences and sending’s off can be seen in Law 12 – Fouls and Misconduct, but it makes no explicit reference to players making physical contact with referees, nor the appropriate punishment that should be sanctioned.

As it stands in England, physical contact with a referee or match official is not a straight red card, unless the referee deems the force of the contact as violent conduct.

The most infamous moment involving a player making physical contact with a match official came in September 1998, when Paolo Di Canio, playing for Sheffield Wednesday, sent referee, Paul Alcock, tumbling to the turf in a match against Arsenal. Di Canio received an extended 11 match ban and a £10,000 fine.