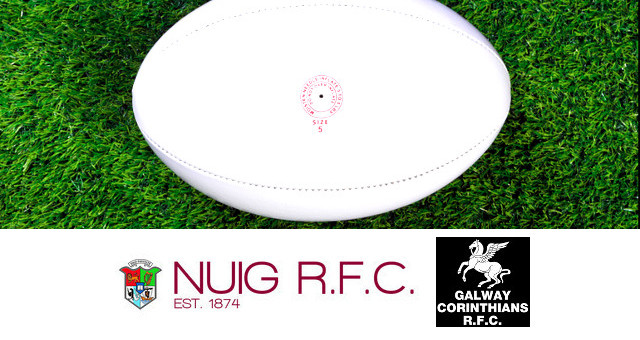 Murphy’s score, in the 79th minute, could prove crucial in the final shake up as it denied NUIG-Corinthians a losing bonus point. However, the home side may feel aggrieved after the referee failed to spot a knock-on from Con’s flyhalf, James John O’Neill, earlier in the play.

It was fitting that the two touchdowns should come from the pack as the Southerners’ forwards won the battle up front in a match played out in dreadful conditions.

And it was the visitors, playing into the storm force winds, who opened the scoring via the boot of right wing, Joseph White, after three minutes. Although taking the shot from just outside the 22, the penalty kick just about crept over, showing the strength of the gale at the backs of NUIG-Corinthians.

But the home side sparked into life soon after and only for a high tackle by away fullback, Paddy Hegarty, NUIG-Corinthians’ wing, Dwayne Corcoran, would have crossed the whitewash.

The home team and coaches were at a loss as to why they were not awarded a penalty try and Hegarty given a ten minute rest as Corcoran would have scored with no covering defenders and handed the advantage on the score board to the Corinthian Park side.

Corcoran dusted himself down and slotted a penalty goal after 11 minutes to tie the game up at 3-3.

Mistakes were a plenty as the wind and rain worsened.

It was a game for the men up front with Con annihilating NUIG-Corinthians at the scrum and the home side putting their maul to good use. However, the away team cleverly negated the power of the maul by refusing to engage at lineout time.

On 31 minutes, the home team nearly broke the deadlock.

A box kick from Con’s scrumhalf, Jason Higgins, went backwards because of the gale and hooker, Craig Hansberry, was first on the scene but failed to control the ball in the try area, knocking-on with the line at his mercy.

NUIG-Corinthians did go into the break with a lead thanks to an excellent penalty kick from Corcoran on the stroke of halftime. (6-3).

The three point advantage was wiped out within five minutes of the second forty as Con’s scrum exerted its dominance to win another concession from the referee.

White chipped over the shot to leave the scores at 6-6.

It was an uphill struggle for the home team from thereon out as Con utilised the wind to great effect, gaining huge chunks of yardage via the boot.

Their huge pack lifted the intensity and increased the pressure on the home team. Despite some stubborn and brilliant defence from NUIG-Corinthians, number two, O’Brien, crashed from five metres out to claim the first try of the day after 53 minutes.

White bisected the posts with his conversion. (6-13)

NUIG-Corinthians bravely tried to fight their way back into the match by playing one man out rugby as the wind meant they could not kick for position or whip the pill out wide to the backs.

But Con’s defence was organised and relentless and they refused to give an inch at the gain line.

The game was settled in the last minute as Number Eight, Murphy, a go to ball carrier for the Cork men all day, powered to secure the four points and prevent NUIG-Corinthians from picking up a losing bonus point.

White maintained his 100 percent kicking record by slotting the conversion taking the scores to 6-20 and that is the way it finished.

The away side deserved their victory but NUIG-Corinthians will feel hard done by with a few vital refereeing decisions going against them.

NUIG-Corinthians’ next match is away to Clonakilty/Kinsale on 7th March.