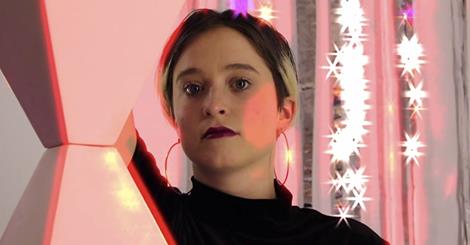 Over the past few years more and more musicians have been trading in guitars and delving further into the world of synths, samples, drum machines and vocoders. That’s not to profess that annoying cliché that “bands are dead”, because they most definitely are not. Amazing Irish acts that have stayed loyal to the guitar, bass, drums etc. format have been keeping that fire burning very nicely, with talents such as And So I Watch You From Afar, Enemies, We Cut Corners, Spies and Girl Band (to name but a few) taking the rock band format in all kinds of exciting directions.

Nonetheless, 2015 looks like it’s shaping up to be a year in which Irish electronic music takes another step outside of the bedroom, grabs us all by the scruff of the neck and demands the attention of those both home and abroad. Styles range from the stomping, dancefloor filling anthems by snyth – pop/disco monsters Le Galaxie, whose sold out New Year’s Eve show in Dublin’s Meeting House Square shot people straight into the new year, lasers n’all, to Matthew Flanagan – aka DeFeKT’s – analog heavy, menacing techno that has been turning plenty of heads. He played a stellar show in Galway’s Factory in 2014 and his dedication to the craft and a notably hands – on approach to the hardware means that things are only going to progress for him.

On the more gentle side of things, Newbridge native MMOTHS is set to have a massive year with an album on the way and two gorgeous tracks (‘Yago’ and ‘Santo’) released toward the end of last year. His only show last year (accompanied by a full band) had to be moved from Block B to the larger Hanger venue in Dublin due to massive demand. His ethereal and emotive approach to ambient electronica will be leaving half the country in a fuzzy dream – like state by the end of the year.

Belfast – based trio Not Squares have been producing some of the finest disco – housey – groovy jams for the past number of years and their live shows are nothing short of synthy bliss for those who want to dance like maniacs for an hour (watch the video for their infectious ‘Asylum’ to understand what I mean). Their style has evolved over the years, moving in the direction of a more disco/LCD Soundsystem – style sound with more recent releases. New single ‘Oops Said Hi’ is as addictive as it is groovy and will feature on the new album, Bolts, that’s due to drop April under Strange Brew Rekkids run by The Roisín Dubh’s very own Gugai.

Other notable mentions that you need to be keeping your eyes open for this year are Cork man Eoin French’s gorgeous downtempo electronica under the name of Talos. He’s has received an awful lot of hype and put out a gorgeous video for his single ‘Tethered Bones’ made by Feel Good Lost (The same gang behind Hozier’s ‘Take Me to Church’ video). Dublin man REID is well worth keeping an eye out for as he continues to make great melodic emotive house music with some stellar guest vocalists. As for club nights in Galway, the future is bright for the organisers/djs of the TOME crew and Kinetica.