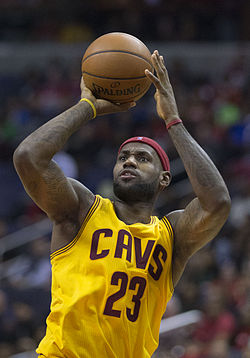 Anyone with a passing interest in sports knows who LeBron James is and will probably remember last summer, when the four time MVP decided to return home to his home state and play for the Cleveland Cavaliers. For some he was coming ‘home’, but in truth he was leaving an aging team in the Miami Heat, who lost convincingly to the San Antonio Spurs in the NBA Finals, and joining a team who had the first pick in the NBA draft three times in the last four years.

Simply, LeBron was doing what was best for LeBron. This year, he has become the dominant personality in the franchise, acting as de facto General Manager by initiating the trade of Andrew Wiggins and Anthony Bennett, two young players with huge potential, for all-star Kevin Love. There are good reasons to believe that he is also undermining first year head coach David Blatt and hoping to get his own man in.

LeBron is even taking over his fellow stars’ roles on the floor, at times acting as point guard instead of rising star Kyrie Irving and finishing games at power forward, Love’s position. Long seen as one of the game’s good guys, LeBron’s actions this year have been selfish and are in danger of damaging his legacy on the game.

Most sports fans will have heard of LeBron James, Kobe Bryant, the Boston Celtics and the New York Knicks, but they probably won’t have heard of the Atlanta Hawks. Not the sexiest franchise, the Hawks even struggle at times to be relevant in their own city, with most Atlanta fans supporting other NBA teams. A few weeks ago the Hawks owners put the entire organisation up for sale.

They don’t seem like a team to be interested in, except that, despite all the above reasons and only having a lone all-star in Paul Millsap, the Hawks are at the top of the Eastern Conference Standings and have the second best record in the NBA. The Hawks play one of the most enjoyable styles of basketball in the league and a big part of their success, along with center and spiritual leader Al Horford, is shooting guard Kyle Korver.

In shooting 52.5% of his three pointers this season, Korver is having his best shooting season at the age of 33, an anomaly in professional sports. While in other competitions, teams like the Hawks would not have the squad depth to keep this up, but the balance of the NBA salary cap means that the Hawks could keep this up for the season.

The Golden State Warriors are the favourites for the Larry O’Brien Trophy and the NBA championship. It’s probably not a clairvoyant prediction to say that, considering they are the team currently with the best record, but the reasons why they are the top ranked team will not go away. They have the best backcourt in the league in Steph Curry and Klay Thompson, nicknamed the splash brothers for their often outrageous shooting skills.

They also have Draymond Green, a player worth ten times his current salary, and lastly, they have Andre Iguodala and David Lee, two former all-stars, now coming off the bench for the team. In simple terms, they have a stacked, once in a generation roster that is nearly impossible to assemble given the salary cap limitations. The Warriors will never get a better chance.

The Most Valuable Player race this year is an interesting one with two outstanding candidates, Steph Curry and James Harden, who have never been in contention before. From a statistical standpoint both players are having very similar seasons. Harden is averaging 26.6 points and 6.7 assists per game, while Curry is averaging 23.3 points and 8 assists.

In Curry’s favour is that his Warriors are currently the best team in the league and the fact that he is liked by both the media and his peers. In Harden’s favour is that he is carrying the Houston Rockets, who are currently third in the Western Conference standings, and he is the league’s leading scorer. However, Harden has been seen as selfish by some in the league after leaving the Oklahoma City Thunder and due to his lack of defensive effort at times. At the moment, Curry is slightly in the lead after three straight wins over Harden’s Rockets, but that could easily change before the end of the season.