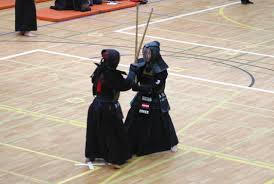 We are a budding university club currently looking to establish a venue and training times. We are doing this so that students and staff can share in our thorough enjoyment of this safe, yet vigorous and full-contact sport.

Kendo is the traditional Japanese martial art of fencing. Practitioners use bamboo foils to strike armoured targets on their opponent’s body. In appearance it is a loud, intense, physically violent activity. Despite this image, the aim of kendo is to achieve a state of awareness and inner clarity that will allow you to face life’s challenges decisively and associate with others with sincerity, both inside and outside the training hall.

Why should it interest you?

Modern kendo is accessible to people of all ages and abilities. Very safe when practiced correctly, it is an authentic expression of Japanese culture and a fantastic workout. Strength, fitness, speed and agility are products of training, but not initial requirements: you rely on good technique and mental fortitude to succeed. Kendo can a be highly competitive or highly spiritual pursuit; the two aspects are not mutually exclusive. You can train through both competition and mastering the forms to improve yourself.

What you should do

To start with you should definitely visit our Facebook page at ‘NUIG Kendo Club’ and give us a like. We will be posting information regarding training times and venues as it becomes available. In the meantime, to see what kendo looks like and what you can expect, YouTube search ‘The Empty Mind – Kendo at the Budokan’.

What is Kendo, really?

Kendo is shugyo: a lifetime discipline of self-cultivation. Training is built on a foundation of basic technique and etiquette. This foundation is the basis for one’s cultivation, not just within kendo, but as a human being. The three avenues of pursuit – competition, form and grading – all serve as means to test one’s technical and spiritual development.

The history of Kendo

Kendo is an outgrowth of the ancient Japanese swordsmanship schools of kenjutsu. For safety reasons these ancient schools dispensed with live blades; to accommodate an all-out approach to training the katana came to be replaced by lightweight bamboo foils and armour.

Kendo has grown worldwide in line with the concept of bushido or chivalry, and maintains a culture of respect and cultivation that springs from Zen and Confucian philosophies. It has been practiced virtually unchanged for nearly a century and a half. Although it has been somewhat streamlined since World War II, to this day it retains the serious mindset of the war-hardened samurai.