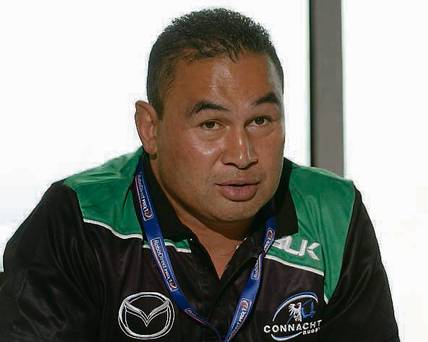 The game was billed tie of the round in the Challenge Cup this weekend and it did not fail to live up to the billing.

Holding onto possession, Connacht started well, going through the phases, making gains with every carry. Flyhalf, Jack Carty, sliced through the Chiefs’ first up defence and was tackled before he could offload.

But a quick recycle enabled Kieran Marmion to whip the ball out to Willie Faloon who delivered a delicious cut out pass to Matt Healy allowing the winger to skate home at the corner after six minutes.

Carty missed the difficult conversion from the touchline. (5-0)

The Chiefs were clearly stunned by Connacht’s physicality but after clearing their heads, Rob Baxter’s men gained a foothold in the game through their bruising pack.

Exeter set up camp in the home side’s 22 and after several collapsed mauls and scrums and penalties to the Chiefs, referee, Mathieu Raynal, ran out of patience and proceeded to the posts to award a penalty try.

However, Pat Lam’s men were not behind for long as they crashed over for a pushover try of their own through a13 man maul.

Carty missed the conversion but the home side were ahead 10-7 at the 24th minute mark.

No quarter was given with massive hits going in on both sides.

The scores were eventually levelled after 36 minutes when Slade chipped over a simple penalty from right in front after it was adjudged Connacht had not released in the tackle.

It looked like the scores would be tied going into the halftime break but the Westerners had other ideas.

From a scrum, an area where the visitors had dominated all day, a beaut of a try was scored. Marmion went the short side to unleash Healy who was having a stormer of a match.

Only a last ditch tackle from blindside flanker, Don Armand, slowed the Dubliner. Quick ball ensued from the ruck and simple take and give passes exploited the two man overlap which enabled Mils Muliaina to put away Danie Poolman in at the corner for the home side’s third score of the game.

Carty nailed the conversion for his first success of the day to give Connacht a seven point lead going into the halftime.

Exeter drew first blood in the second half via Slade’s boot to close the gap to four.

And it got even better for the English side as Poolman threw the ball straight to Chiefs’ Captain, Dean Mumm, who galloped over the whitewash despite the suspicion he was offside.

Slade bisected the uprights and Exeter were up by three points after 47 minutes. (17-20)

The Chiefs would not have to wait long for their third score though as phase after phase on the Westerners’ line eventually told and Armand squeezed over.

Slade converted and the visitors had a healthy 30-17 going into the last 15 minutes.

The Chiefs earned another penalty soon after and Slade’s boot didn’t let down the visitors as he pushed the difference past three scores.

To Lam’s men’s credit they did not lie down and they achieved a bonus point try through another excellent pass when Healy slalomed his way through the defence to go under the posts.

Carty converted to bring the scores to 33-24.

Replacement, Darragh Leader, had an opportunity to steal a losing bonus point with a long range penalty but his radar was off target.

Pat Lam said after the game that what really killed his team’s chances was the “twenty plus turnovers” conceded.  “If you can’t keep the ball, you can’t get field position.”

He lamented the ten minutes after halftime, “those six-ten minutes were absolutely woeful.”

Chiefs’ supremo, Rob Baxter was delighted with the power of his side, “We carried very strongly. We played our best rugby when we were direct and our power rugby was what paid real dividends for us today.”

By Matt Cassidy @The Sportsground