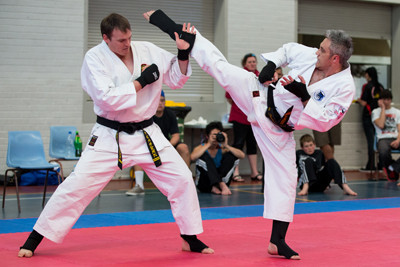 Between hosting nationally and internationally acclaimed seminars, the all-Ireland Intervarsities and arranging gradings and signups, the NUIG-GMIT karate club has been very busy recently.

These events, along with the club’s largest beginner training class in recent memory, have ensured that there hasn’t been a dull moment in the last few months.

This past summer, the club has hosted Hanshi, Patrick McCarthy, an internationally acclaimed and accredited instructor, researcher and author, who has experience in a multitude of different styles of martial arts. His seminar was a week long and attracted karate practitioners from all over Ireland, England and mainland Europe.

The event was well covered online and Ireland’s own Irish Fighter magazine also published an article on the event, with very positive reviews. At the seminar, a large number of members who attended were graded, four members receiving their provisional Yudansha black belt and one member received his 1st Dan black belt.

The success of the seminar inspired the club members and the committee to organize and arrange a subsequent series of day long seminars, which are held on a monthly basis. The focus of these seminars is Yamaneryu Bo-jutsu and they are taught by one of the clubs own instructors, renshi-ho, Damien Costello, who has a black belt in bo-jutsu.

Karate practitioners, of various levels, ages and karate styles, have come from all over Ireland to attend. The second seminar in the series was held on Sunday 4 January, where the focus was bo kata and two person drills using the bo.

These seminars were not the only events the club hosted this year. The club also hosted the All-Ireland Karate Intervarsities in GMIT.  Not only did the club receive great praise for the how well the event was run, but the club’s members also took away gold, silver and bronze medals, across various categories, in both the male and female events.

This is the second year in a row where the club has won gold medals in the kata discipline and this year, there was both an increase in team size and awards won by the club. Due to the success and how smoothly the event ran, the club is hosting the Intervarsities again this year with approval from other colleges. Hosting the event for two subsequent years will help to celebrate both NUI Galway’s 30th anniversary as a club this past year and GMIT’s 10th anniversary as a club, which will be this coming year.

With the Intervarsities waiting in the future, you might think the club isn’t busy. However, the club is hosting its first grading of the academic year on Tuesday. Knowing that three 4th degree black belts will be evaluating their progress, everybody is putting in 100% into their preparation. After the grading the club’s committee has organised a celebration in the college bar for everyone to celebrate all the hard work that they have put in over the past few months.