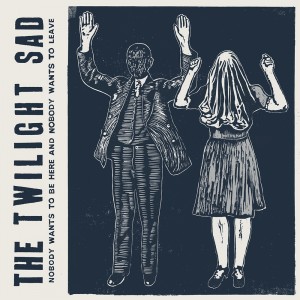 Scottish three-piece The Twilight Sad recently turned ten. In the last decade they have released three albums, several EPs, toured Europe and America, performed with Royal Scottish National Orchestra as well as earning praise from The Cure’s Robert Smith and The Manic Street Preachers (Having supported them in Glasgow in April of this year). They have spent ten years honing their sound, with their first two albums, Fourteen Autumns and Fifteen Winters and Forget the Night Ahead creating vast, cacophonous guitar soundscapes to compliment James Graham’s heavily accented and even more heavily impassioned vocal work. Graham’s lyrics can sound like a heart being ripped through a chest, and it is that vigour that made the first two albums so appealing. These albums sounded like folk records after having all of their emotive chord progressions and vocals amplified by ten and run through several distortion pedals. And it worked a dream.

Album number three, No One Can Ever Know, was a different story. The My Bloody Valentine and Mogwai style walls of sound were taken away and replaced with more subtle guitar sounds and heavy use of keys, reminiscent of Nine Inch Nails, Joy Division or Depeche Mode. This album had lots of passion and was also arguably more blatant in its darkness with the songs having a more sinister sound. It was a strong album, sure, and songs like ‘Alphabet’ and ‘Sick’ (A song that featured some of Graham’s clearest swooning vocals to date) are some of their strongest. However, this album gave the impression of a band that were not entirely sure of were they were headed stylistically or where they even stood as a group. There was a sense of a band that weren’t entirely comfortable in their own skin, unsure of what the future held, or unsure of what kind of music they wanted to play.

On 27 October The Twilight Sad returned with the release of their fourth album Nobody Wants to Be Here and Nobody Wants to Leave and almost immediately when listening to it you get the impression that you are hearing a band who have regained balance after a period of admitted uncertainty. The determination that went into making this album is palpable and you realise that you are listening to a band that knew exactly the album they wanted to make. It strikes a fine balance between the spectrums of sound that their other albums had and weaves all of those elements together carefully. Album opener ‘There’s a Girl in the Corner’ gives us the band’s mission statement with a chorus full of delayed, fuzzed up guitar courtesy of Andy MacFarlane. The album features the closest thing to rock ‘anthems’ that The Twilight Sad have ever come to producing with the chorus in ‘I Could Give You All That You Don’t Want’ showcasing Graham’s true howl which seemed somewhat amiss in the last record, or at least camouflaged. ‘It Was Never the Same’ has an almost singalong-esque refrain (but yeah, a totally miserable one), “We’re falling, we’re falling, we fall apart”. Parts of the album swing dramatically to earlier styles with ‘In Nowheres’ harking back to Forget era themes with drums that sound like they are being pounded as if drummer Mark Devine’s life depends on it. And I think that’s largely what the album sounds like, on the whole. The Twilight Sad have written, recorded and released and album that sounds like their lives depended on it, that they have put everything they had into it.

The album ends with possibly the most tender song they have come out with, ‘Sometimes I Wished I Could Fall Sleep’. The song features little more than a piano playing gentle chords and James Graham’s lyrics sounding clearer than ever. Behind the vocal and piano there is a pulse, a soft continuous beat that drives the song, a sign that even at their most vulnerable, these songs are driven and determined. On Nobody Wants to Be Here and Nobody Wants to Leave, The Twilight Sad have put everything they have on the table and left it there for you to do with what you want. They’ve held almost nothing back, and while it’s not a perfect album (sometimes their balancing of styles leaves certain songs, like ‘Drown So I Can Watch’, feeling slightly unfinished or lacking), it’s an album that shows a band back on their feet, ready for the next stage, able for what the next couple of years will bring.