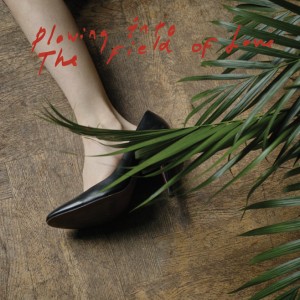 Iceage appeared in a fit of violence and disinterest with their first album New Brigade in 2011. They played the harshest, bleakest music anyone had heard in years. They came from a community of musicians in Copenhagen called ‘The New Way Of Danish Fuck You’. They grabbed laudatory album reviews while still looking down on the publications that wrote them with sneering contempt. There’s one music video of Iceage that summarises them up to this point; one of them performing ‘Morals’ in Copenhagen. The band crash through the song, singer Elias Bender  Rønnenfelt attacking the mike while wearing black gloves, as if to avoid leaving fingerprints at the scene of his crime. But now they’re trying to expand their horizons from the monochrome aggression of their first two albums, and so we have their latest, the bizarrely titled Plowing Into The Field Of Love.

The music is therefore less hardcore, and starts to inhale other influences. It’s more atmospheric than before, slow rhythm drums replacing the harsh urgency of the first two albums. It’s got a deliberately old style of instrumentation, making a lot of use of piano and trumpets. But the primary function of the instrumentals is as a bed for Rønnenfelt’s street – preacher vocals. Rønnenfelt’s vocals are an exercise in context, because if the frontman spluttered this slurred stream of consciousness at you in a pub, you’d glance nervously at the bouncers and wonder how you could ask for him to be turfed out without his noticing. But here the flow has a weird, compelling charisma, a bleak, hurt lustful moan. He dominates the record, adding extra menace with double-tracking and various other tricks, occasionally pitching up with moments of twisted poetry like “The cheap sweat-smothered make-up makes her face, look as if dissolving, yet full of grace” on ‘The Lord’s Favorite’. On initial listens it sounds like a stream of aggression and misery, but after a while shapes start to emerge from the howls. ‘Forever’ marks a real liberation, when backed by trumpets and violins he hollers “I’d lose myself forever”, with some curious version of hope in his voice, embracing the void.

Iceage’s sound may have changed, but the themes of disassociation, confusion and pain are still present. It’s a captivating exploration of these themes. You still might prefer not to have Rønnenfelt as a pub buddy, but when he’s on form like this it’s almost impossible not to listen.