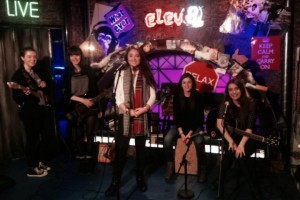 The all – girl indie group, Featuring X were gigging in Monroe’s on 10 October, bringing their talent and spark to the West. The band all hail from my hometown of Drogheda, Co. Louth and I grabbed Sarah McLaughlin (bassist) and Dara Farrelly (guitarist) for a chat afterwards to find out how the quintet are dealing with their rise on the Irish music scene.

Sin: So, for those not in the know, how did you start up as a band?

Sarah (S): We all always had an interest in music and in TY in our school, Our Lady’s College Greenhills, we decided we should give it a go for a local talent competition. Drogheda always had a teen – gig scene so we decided to get in on that too.

Sin: So you are well – gigged then since the early days to say the least. How was performing here in Galway?

S: The crowd were actually so good tonight, we really enjoyed it! We got free food from Monroe’s, which was great… And the sound engineer was good. We are back in Galway again on 6 December supporting The Strypes at Seapoint, so we are really looking forward to that!

Sin: That’s so cool! What other aims do you have for the next few months?

S: Ok Dara. We have our second EP coming out early 2015 so we’re really excited about that. Our sound has really changed recently I think, the guitar has more reverb and more riffs.

Sin: And does that mean your influences have changed then?

S: *Laughs* Well, we still are influenced by Arctic Monkeys and Queens of the Stone Age in a big way but I think we’ve moved from their harsher sound this time round and sound very indie. We are still busy writing away though and we’re looking forward to being back in Numu studios, with our manager Katie Hogan. We recently got signed to Native Records, an independent music label in London so that’s cool too!

Sin: And do you find it hard balancing everything with college?

D: Not really, it’s easier now in first year. The two of us, Niamh (lead singer) and Eleanor (guitarist and backing vocalist) are based in Dublin now and Jenny (drummer) is in Dundalk so it’s handy for us to meet up.

Sin: So before I let you guys go, what has been your best moment to date?

S: Electric Picnic last year was amazing but this year definitely being picked to represent Leinster for the Guinness Amplify Series. We are on billboards all over Dublin and one in Drogheda too… It’s weird but pretty cool too! It was such an honour!