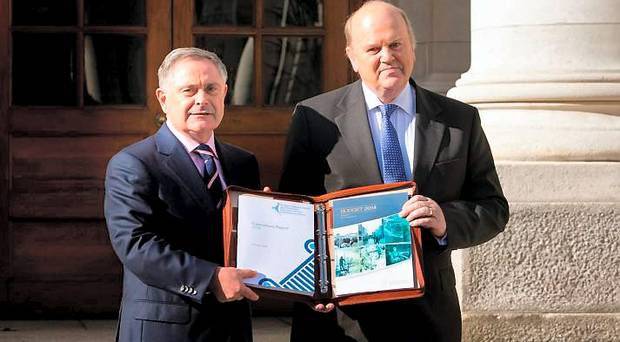 On Tuesday 14 October, the Minister for Finance Michael Noonan and Minister for Public Expenditure and Reform Brendan Howlin revealed the budget for 2015.

There seemed to be an air of optimism and hope as both ministers were keen to emphasise the face that this was the first budget in 7 years that included spending increases and the first tax cuts. The minister signalled the budget as “the end of austerity”.

However, with a general election only 2 years down the line, the opposition parties within the Dail claimed that the ministers’ increase in welfare and spending, and tax cuts are purely a plea for re-election.

The minister labelled the budget prudent. “The economy has been growing very strongly.  We want to ensure that the growth continues, so we are bedding down the growth and making sure that sectors respond and extra jobs can be created,” Mr Noonan also told TDs that he expects growth in GDP of 4.7pc this year and 3.6pc next year and that he predicts unemployment will fall to ten percent by the end of this year, from a height of 15pc during the recession.

This was Ireland’s first neutral budget since austerity began in 2008, and the first in seven years not to cut social welfare. The main issues of the budget were tax cuts and water charges, where a water subsidy was announced worth €100 per annum for all recipients of the household benefits package.

There was also an increase in spending on homelessness, (an increase from €42 million to €52 million), education, (with its budget at €8.3 bn; and 1,700 new teachers are to be recruited), and social housing, which is a huge problem that has blighted Irish society. The government guaranteed to pledge a capital investment of over 2.2 billion euro for social housing over the next three years, building up to 2500 social housing units. The major contentious issue was the removal of the “double Irish” tax laws for multinational companies by 2020, with corporation tax still at 12.5pc.

Overall, the budget was positive for third level students. News that the ‘’back to education’’ allowance and grant levels will not be changed has been well received, yet certain areas of education have not been addressed in the budget.

The main contentious issue however was an increase in the student contribution fees from €2750 to €3000. This decision was criticised by the Students’ Union of Ireland, which it calls “a major increase in the cost of college”. The charge was increased for the fifth consecutive year as part of planned increases to gradually bring the charge from €2,000 and €3,000.

However, they welcomed the decision not to cut the student maintenance grant and the “back to education” allowance, and have described the decision to return €25 million to colleges as “good news for education”.

The government also pledged €600m in foreign aid to places like Syria, Palestine, and pledged €2.5m for the rebuilding of Gaza. The government was successful in securing €1.2bn of structural funds over a six-year period, to ensure that the recovery spreads evenly across the country.

When asked about how they found the budget, the response of Young Fine Gael was very mixed. They praised some positive aspects of the budget such as increasing the USC entry point from €10,000 to above €12,000, raising the threshold for paying the higher income tax rate from €32,800 to €33,800, cutting the lower USC rates.

However, some in the party were unhappy that the higher rate was cut and the lower rate wasn’t, and also that child benefit is entitled to all and is not distributed just to those who need it, but were pleased that it was raised.

Overall the budget has been welcomed by students with the no chances to grant levels, “back to education” allowance, increase in spending, and cuts in taxation especially for low income earners. But a major concern on students will be an increase in the contribution charge by €250, as they are already hard pressed with money.

Brendan Howlin praised the Irish public for the austere budgets they have had to endure. “We still have a way to go. But our collective achievement in the face of adversity is a considerable one.”

While Michael Noonan also commented on the improving Irish economy: ‘Prudent and responsible budgeting has got us to this point. [It is] how we will continue. This approach has been a key factor in restoring market access’.