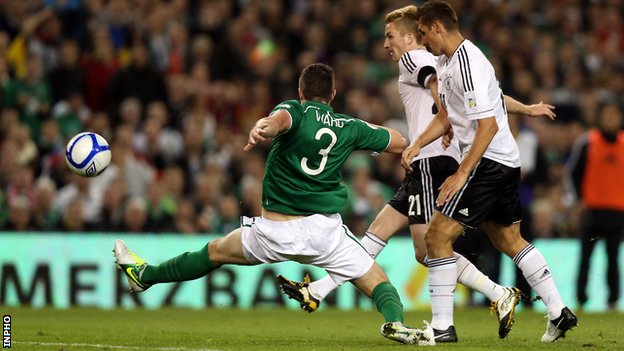 We have always been a nation that produces shock results. Think back when Ray Houghton put the ball in the English net in Stuttgart at Euro ’88; when he did the same again to beat the Italians 1-0 at USA ‘94 and when Robbie Keane’s injury time equaliser gave the Irish a point and hope of qualifying from their group when we played the Germans in the 2002 World Cup.

In that team we had a healthy mix of youth and experience. The old guard who were set in the ways imposed by Jack Charlton (although only a handful had ever played under him) and the new wave of youth who were influenced watching the World Cup matches in Charlton era.

A lot of time has passed though and it is worth noting that the World Cup appearance in 2002 was possibly the peak of Irish soccer and we have been on a steady decline since; the 6-1 defeat at the Aviva almost two years ago to the day against the same opposition highlighting that fact.

It will take a hard fought performance from the Irish to avoid a repeat scoreline against the current world champions.

There are positives for Ireland though with Germany not having looked their best against a mediocre but resilient Scottish side in the September internationals. Both captain Bastian Schweinsteiger and Sami Khedira – essentially the hard-core spine of the team – missed out that day and they are still not back from injury.

Marco Reus is also out with ankle ligament damage which will only further enhance Ireland’s expectations.

However, Ireland do also have some injuries to deal with. Seamus Coleman and James McCarthy – arguably Ireland’s two best players – sit it out with respective injuries.

U-21 international and Hull City right back Brian Lenihan has been drafted into the squad to cover Coleman with Martin O’Neill saying that there was no “natural right-back in the team at the moment”.

He is very inexperienced though having yet to play for Hull since signing five weeks ago (only previous having played in the Airtricity League) and it is very unlikely that he will provide the energy and reliability that Coleman does every time he dawns a green jersey.

Midfield is where the game will be won and lost though and it is to be expected that Ireland will play five in the middle such as they did against Georgia to try and combat the creativity and limit the space for the Germans to play in.

Toni Kroos, who has already got three assists in seven league appearances for Real Madrid, will look to make things happen and he must be stopped.

If he isn’t, there is no shortage of finishers in the final third. Two time World Cup Top Goalscorer Thomas Muller will most likely lead the line and support will be provided by Chelsea’s Andre Schurrle and Mario Gotze of Bayern Munich, who got that all important winner against the Argentines in the World Cup Final.

But it seems like with a lot of teams these days, Germany appear top heavy. The talent they have going forward is enough for when either Schweinsteiger or Khedira are the physical presence in midfield but their replacement, Christoph Kramer, just lacks that presence right now.

If we can match the solid and tough performance put in by the Scots we might put it up to them. But perhaps that is just a bit optimistic considering our lacklustre attempt at putting away the Georgians last month.

However, Germany do have a weakness at the back. Both German full-backs, Eric Durm and Sebastien Rudy, are inexperienced and there may be some joy gotten from playing the ball out wide.

Aiden McGeady showed he has the ability to do something special and if he can pop up with a moment of magic like he did last month we may be feeling such as we did when Jason McAteer scored against the Dutch all those years ago.

It is the case of the “green goggles” again though. Whatever the situation and whoever we play us always think we can get something out of it; sneak an early goal and then put the bodies on the line to squeeze out a result.

The reality of the situation is that the Germans will have 60% possession, five or six clear cut chances and just generally dominate the play all round; as you would expect from the world champions at home.

Ireland, on the other hand, will struggle to get into the final third, find holding onto the ball difficult and will probably only get one decent chance.

But that one chance might be enough. It is highly unlikely but we have nothing to lose after all, and there is nothing more dangerous in sport than a team with nothing to lose.