No other region of Ireland perfectly encapsulates Irish identity and culture more than Connemara. In the past, films such as The Quiet Man have portrayed this cultural landscape as an idyllic paradise with endless green fields filled with grazing livestock and charming thatched cottages complete with native-speaking inhabitants.

With A Skull in Connemara, playwright Martin McDonagh presents a very different version of our seemingly national treasure. The quaint cottages are more hovels than homes, the endless green fields are littered with the decayed remains of cattle and the locals are a surly bunch whose isolation has left them starved for entertainment.

So when Mick Dowd – whose annual vocation of exhuming the graves of the dead to make way for the more recently departed – is called upon to dig up his dead wife, Oona, the villagers begin to wonder if her death was more than a simple drink-driving accident. 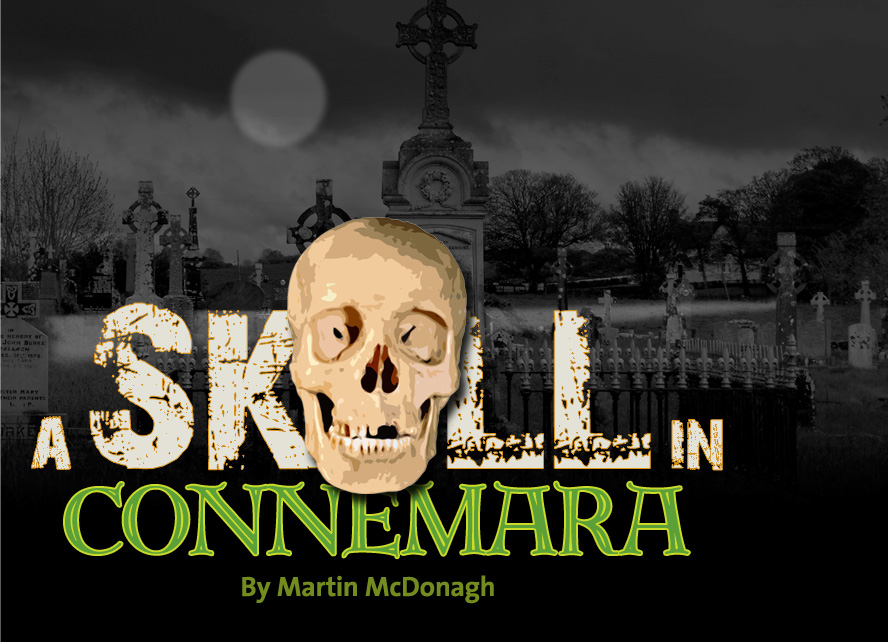 The play opens with Mick (Garrett Keogh) answering the door to reveal frequent visitor and drinking-buddy, Maryjohnny, played by Maria McDermottroe (Killinascully, In the Name of the Father). The conversation that follows is a series of repeated comments and questions concerning the weather: ‘It’s turning now, Mick. The summer is going’. ‘It isn’t going yet, or is it now?’ ‘The summer is going, Mick.’ While some critics have pointed out that McDonagh’s fondness for repetition serves no useful purpose and does not contribute to the plot in any way, it should be noted that it does strengthen the characters’ connection to the West and indeed the village of Leenane.

The fruitless yet humorous exchange between Mick and Mary is broken by the arrival of Mairtín, a Man Utd jersey-clad Leaving Certificate dropout who hasn’t progressed passed the maturity of a thirteen year old. Jarlath Tivnan, the twenty-three year old NUIG alumnus who plays Mairtín, is undoubtedly the life and soul of the production. His character’s youthful energy and penchant for mayhem and mischief had the audience laughing at his every utterance.

Owen MacCarthaigh’s cleverly constructed set added to the humorously morbid atmosphere of the play. The cracked walls of Mick’s derelict cottage collapse to reveal a raised graveyard dimly lit by an oil lamp hanging from the decayed branch of a crooked tree. The gothic aesthetics of the scene are aided by Carl Kennedy’s eerie sound effects which could be heard in-between the audience’s fits of laughter. This scene also sees the introduction of Mairtín’s older brother and local Garda, Thomas Hanlon (Patrick Ryan), who longs to be a “real” detective like Quincy and Petrocelli, but is unable to tell the difference between hearsay and circumstantial evidence.

The following scene effectively showcases director Andrew Flynn’s ability to bring the darkly-comic humour of the play to new heights as Mick and Mairtín, in an episode of poteen-fuelled lunacy, hammer the skeletal remains of Leenane’s former inhabitants to “skitter” while Dana’s hit single ‘All Kinds of Everything’ plays in the background.

Since the success of his films In Bruges and Seven Psychopaths, there has been a renewed interest in playwright Martin McDonagh. Productions of his more-highly acclaimed plays The Lonesome West and The Beauty Queen of Leenane have been commonplace throughout the country in the last decade. But with its vibrant cast, macabre set design and experienced director, Decadent Theatre’s recent production of A Skull in Connemarahas breathed new life into a play which had been unfairly neglected in the past.