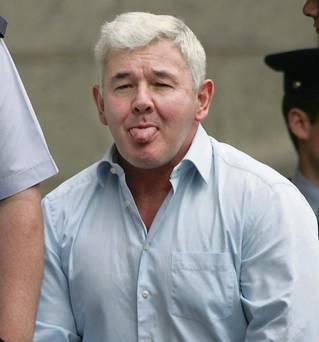 Last Tuesday 15 October, another failing of the Irish Judiciary System, John Gilligan was released back into the wild.

His unbuttoned shirt and notoriously cheeky grin welcomed cameras as he exited Portlaoise Prison, to the disgust of all of those to have met his wrath down through the years.

Prior to his incarceration in 1996, Gilligan was the Kingpin of one of the biggest drug-trafficking gangs on Dublin’s North side. He ruled with an iron fist for so long and amassed millions as he led the Gardaí and Interpol on a merry dance.

All ‘good’ things must come to an end however and journalist Veronica Guerin spoiled the party. The first of her kind, she put herself in the line of fire, pursuing the ill-famed criminals involved with Gilligan and facing the consequences on more than one occasion. People lambasted here stubbornness and ultimately she unfortunately became a martyr for the cause.

On 26 June 1996, while on her way home from court in Naas, Guerin was gunned down in a drive by shooting by one of Gilligan’s associates. This was to be a watershed moment for Gilligan and Co as a task force was set in place to bring about his downfall.

For the first time Gardaí had a face to put to the name and public outcry made it impossible for them to ignore what was going on. Subsequently they couldn’t pin the Guerin murder on the little general, instead Brian ‘the Tosser’ Meehan took the fall, leaving Gillian to serve a total of 17 years behind bars despite being given an initial 30.

After his release on Tuesday he was quoted as saying: “I had nothing to do with Veronica Guerin’s murder. I tried to get that trial on three times because I was going to win, the State Prosecution said I going to win.

“Ms Guerin never wrote one word about me. I didn’t assault here, another reason why I got off is because the state said I threatened her but didn’t have the phone records to back it up.

“She did call to Jessbrook, but I’m after been on trial and I’ve proven that I’m innocent. I’m free now, I could have come out of the prison and hid, I didn’t come out and duck and dive and I’ve no problems with anyone.

“What I’m looking forward to most is a beer.”

An article in Sunday’s ‘the Sun’ newspaper, stated that Gilligan had millions of Euros stashed in offshore accounts however one of his stockpiles has gone missing. In 1999 prior to Ireland becoming part of the Eurozone, Gilligan ordered a few of his close associates to dig up the money he had hidden. Yet to their horror they couldn’t locate the €6million. Years on after a section of the M60 has been built over the fields where his fortune was based the drug lord is set to be out of pocket.

If Gilligan wants to mix it with the big boys again he will now have get some hard cash fast, and after his unsuccessful appeal against the sale of his wife’s former Jessbrook estate the money looks scarce. This was one of the many possessions the Criminal Assets Bureau (CAB) seized back in 1996 and his inability to regain the 3,500-seater show jumping arena has set a precedent.

During his incarceration, Gilligan’s wife, Geraldine, has continued to live the high life owning a pub in Alicante, Spain. Showing that despite all of the work put in by the CAB, Gilligan still has the means to set up operation once more.

Saying all that, the drugs scene has evolved over the past two decades and it’s unlikely that the new Kingpins will rush into deals with the country’s most infamous criminal. It’s unlikely that the current crop at the top table would be willing to step aside either so it’s interesting to see how Gilligan’s untimely reintroduction into society will play out.

One thing’s for certain, we shouldn’t be asking this question in 2013. He should be facing at least another 13 years in Portlaoise but that’s the way our administrative systems are set up these days. Alterations need to be made so this monstrosity won’t be repeated.