A month after the death of Seamus Heaney, Karen McDonnell reflects on his life and death… 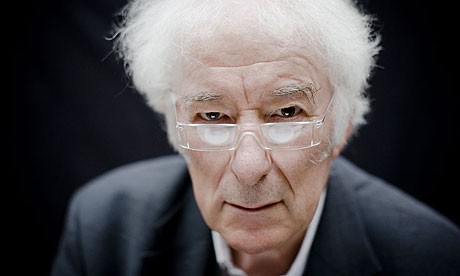 A friend of mine died suddenly last year. We were friends as teenagers, and in the one year we shared at college. He remained in my home town, while I made my life elsewhere. And, as is the way, we didn’t stay in touch. As he remained close to mutual friends, I would hear the odd bit of news about him. His death was accidental – a shock to all of us. Another friend was home from Australia; we went to the funeral together.

People stood in silent tribute as the hearse made its way up the narrow main street, lead by members of the clubs in which he had coached or mentored. They had to open the balconies of the cathedral to accommodate the mourners. As the service unfolded, a tragic, local event became something greater than itself.

Observing the genuine grief felt by the people of my town for this one person created an immense regret within me. There was sympathy for his family. There was sadness for friends who had lost someone very dear to them – one with whom they had shared adult experiences.

As the eulogies were spoken and details of Seán’s contribution to his community emerged, a sense of great loss crept over me. Yes, I could remember the young man, and his gentle presence. But my loss was that of not knowing the man who gave of himself to friends and community.

There, in the cathedral, I experienced a just, communal grief for a decent man; a man who gained the love of many – without travelling much beyond the boundaries of his home town.

The prologue to Act V of Shakespeare’s Henry V describes Henry walking the soldiers’ camp on the night before the battle of Agincourt:

His liberal eye doth give to everyone,

Thawing cold fear, that mean and gentle all

Behold, as may unworthiness define,

A little touch of Harry in the night.

That last line came to mind in the days following the death of Seamus Heaney. And my dead friend also walked through my thoughts. It seemed to me that the deaths of both men created the same communal response – one on a national level, and one local. Both men touched people; purely through their engagement with their fellow human beings, and with their personalities.

When Seamus Heaney died, all media platforms were saturated with comments, stories, and opinions. What was interesting was the range of contributors. Naturally, there was dissection and discussion of literary legacy. More importantly, there were the letters to newspapers, the texts to talk shows, the ‘Seamus Stories’.

The constant theme was the niceness of the man: the giving of his time and advice, and his outward-directed engagement with readers and audiences. When the news broke of his death, a friend texted me that she was tearful as she listened to the radio coverage. This reaction was repeated throughout the country.

Some people, even as they gave voice to it, seemed surprised by their own emotional response. The depth of feeling was illustrated in the comments generated by the Daily Telegraph-published blog, on the day of Heaney’s funeral. The blog’s author – to whom I will not give added publicity – could not have understood the fury he would arouse. That’s no surprise: it is not easily articulated in this era of sound bites, where cynicism is glorified. The strongest vitriol was reserved, not for his comments about Heaney the poet, but for his criticism of Seamus Heaney, the man.

In the eulogies, there has been mention of the Tribe – that Heaney was the file for our Tribe. And that may be so. As a conceit it has a place in the intellectual debate of his work. But, but, but – there may be a sub-textual, emotional truth to the sense of loss demonstrated by the Irish community at the time of Heaney’s death. It was tribal. And the blogger, God help him, will never get that.

We are a scarred nation. We have suffered as a people in the last few years. (People were suffering during the Celtic Tiger, but not many wanted to know.) Lehman’s collapse and the ‘Markets’ apart, the recent horrors were visited on Ireland by Irishmen. Cute-hoor mentality caught up with us and took us for all it could. And we let it. We are ashamed of ourselves, and angry.

That’s a tough truth. It shakes national self-belief. And so we look to the good people among us for reassurance; decent, kind people, who show us what we could be; whose sheer existence reminds us to hope. People like my friend Seán, and Seamus Heaney. Good people are needed now, to make us, by their example, stand up for ourselves as a community, as a nation. When precious exemplars are taken before their time, the loss is all the more profound.

Put Heaney’s legacy aside for a while. It has its guardians. What’s important is to catch hold of the communal, national sense of loss at the death of a decent man.

Yes, there are many Seamus stories. I have my own. I wrote to him last year, requesting an interview. He replied, declining with his customary graciousness while including a compliment about my letter-writing. One of my favourite stories was recounted by Heaney himself in a documentary aired at the time of his death: As a young fella heading off into the night to a local dance, his mother would remind him to dance with those girls who had no dance partners. Heaney brought that sense of duty and consideration of others into his adult world. Into our world.

Thanks for the dance, Seamus.

By Caroline Spencer 2021 YouTube was not made with me in mind, and rightly … END_OF_DOCUMENT_TOKEN_TO_BE_REPLACED