There aren’t too many films about the gay community showing in our cinemas, but  Cormac O’Donnell has seen one that left a good impression… 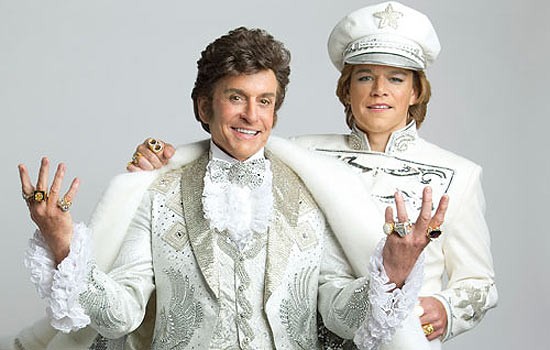 Steven Soderbergh has done it again. Not content with already delivering one of the year’s best films with Side Effects (2013), he returns with the equally impressive Behind the Candelabra, based on the memoir of Scott Thurston. This picture is a biopic which centres on the relationship between the piano maestro Liberace, played by Michael Douglas and his younger lover Scott (Matt Damon).

For those of us in Ireland not familiar with Liberace, think of a male Lady Gaga piano virtuoso playing nightly Las Vegas shows and you get the idea. His piano playing talents were matched only by his flair for outrageous showmanship. Depending on his mood, he would be driven by a sequin studded car to his diamond encrusted piano onstage, or fly downwards to it wearing capes of fox fur. His flamboyant dress sense could only be described as Louis 14th going to a drag party. By comparison, he made Elton John and Freddie Mercury look like shy retiring school boys. Oh and Liberace was gay… How the hell did anyone not notice this?
The narrative is an examination of a five-year relationship between these men, which is both equal measures of affection and dysfunction. The 17 year old Scott, working as an animal trainer on film sets, is introduced to the 57 year old Liberace. Due to expertise with animals, Scott knows how to help Liberace’s pet dog who is blind. Liberace soon finds himself falling in love with this youthful and handsome man and asks him to become his assistant. The word “assistant” is used in a very loose sense here; Scott is in effect, a glorified male prostitute for Liberace.

Despite this questionable arrangement, the two manage to actually fall in love with each other… for a time. It is a toxic love affair which becomes dampened by the material, chemical and sexual excesses that often go hand in hand with celebrity. Liberace’s charm and extravagance lures the naive Scott into his lavish lifestyle. Coming from a foster home and relatively inexperienced to the ways of the world, Scott looks to Liberace as a father figure.

This is where it starts to turn weird. Liberace had a “Dorian Gray” complex in which he feared growing old and had extensive plastic surgery to revert the ageing process. Not content with this, Liberace pressures the already youthful Scott into having the same treatments in an attempt to look more like him.

Rob Lowe steals the show as the somewhat demented plastic surgeon, Dr. Jack Startz. Looking like a cross between Michael Jackson and a half-melted Ken doll, he nips and tucks both, carving their bones and stuffing them full of silicone. Scott also proceeds to go on “The California Diet” based on the good doctor’s advice. It is a diet which contends that plying yourself with nothing but pills and booze will make you lose weight. Talk about moronically obvious. The whole point of these drastic measures is to mould Scott into a younger version of Liberace and thus sustain his ego complex. As if this wasn’t bizarre enough, Liberace formally adopts Scott, turning their bond into a skewed father-son-lover relationship. Whatever it is, there’s too much cocaine, pills, sexual jealousy and legal terms for it to have a happy ending.

Despite the dark places to which this film goes, there are many wonderful laugh-out-loud moments. Due to his plastic surgery, Liberace can’t close his eyes when he sleeps and is hilarious, snoring with his eyes opened. He also has some deliciously droll one-liners; “stare as long as you want; you paid for it”, “I personally support the Austrian rhinestone business”, and “I look like my father in drag” are but a few gems.

Hypocrisy is the underlying theme of the film. Starting with Sex, Lies and Videotape (1989), deceit is a recurring concept in the work of Stephen Soderbergh and is certainly present here. Upon first seeing Liberace in concert, Scott turns to his friend and says; “It’s funny that a crowd would love something this gay.” His friend laughs and replies; “Oh, they have no idea that he’s gay.”

How anyone imagined Liberace was straight is beyond me, but this was an era in which people believed what they wanted to believe. It was much easier to be entertained by Liberace’s talent and showmanship if they thought he was just like them.

Liberace was himself a hypocrite in the way he represented his sexuality. Despite his outlandishly camp persona, he was a staunch closet homosexual. He sued several English newspapers who insinuated he was gay and was financially compensated, a fact he often boasted of.  Right until the end of his life, Liberace treated his homosexuality as some kind of shameful, dirty secret. Those in his circle tried to keep his death from AIDS a secret and pretended it was caused by another ailment. By his own admission, Liberace did not want to be remembered as “some old queen who died of AIDS”.

HBO Television was brave enough to finance this film as a “TV Movie”, premiering it on HBO and Netflix in the U.S. However, it has only been given a wide cinematic release in Europe, which suggests that films about the gay community are still not very welcome in the American cinema. Wake up people.

Michael Douglas and Matt Damon are on flying form here. Their chemistry works because they have a firm grasp on the humanity of their characters, and have approached them as people, not just gay people. Michael Douglas wholly inhibits Liberace, and has earned the right to play him. Douglas’s piano playing is immaculate, hitting complicated finger patterns with perfect accuracy. His voice and mannerisms are a complete construction, as this is not the kind of role we are used to seeing him play.

Matt Damon’s performance as Scott is equally brilliant. Wearing absurd outfits, lipstick, eyeliner and looking downright ridiculous post-plastic surgery, Damon has completely relinquished his own vanity and given in to the demands of the character. As this has been distributed in America as a TV movie, I am unsure if both actors will be eligible for the usual nominations and awards. At any rate, such matters are trivial when compared to their accomplishments here.

I thoroughly recommend Behind the Candelabra and am placing it on my list of favourite films of the year so far. There is a collective sense of “up yours” radiating throughout the picture. Soderbergh as director is at the top of his game, commercially and critically; yet chooses to stick his fingers up to accepted film-making conventions. Age has not reduced Michael Douglas to mere glowing coals; as Liberace, his fires rage. Matt Damon has rediscovered his acting muscles (and his actual muscles) which he flexes impressively. It may be set in the 70s, but make no mistake, it is reflecting our social present. With the recent international gay pride marches, and the ideas of equal opportunities more topical than ever, the issues surrounding this film are all too relevant. Run to your local cinema and see it.