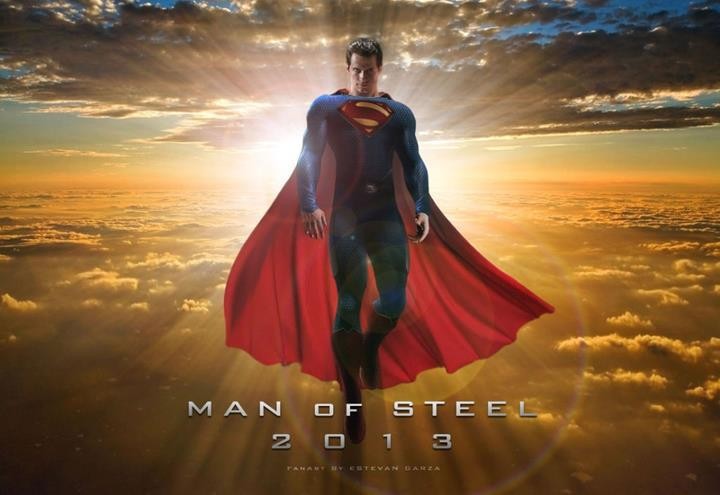 After the outstanding achievement of their Dark Knight trilogy, producer Christopher Nolan and writer David S. Goyer team up once again for Man Of Steel. No stranger to comic book adaptations, Zack Snyder (300, Watchmen) is in the director’s chair, whilst Henry Cavill takes on the role of Clark Kent a.k.a Superman. These guys have been taking every opportunity to tell us that this is a much “different” take on Superman than ever before. Given the style of the Dark Knight trilogy, many thought that Man Of Steel would be another fantastic superhero story, yet grounded in realist, humanist concerns.

This is not the case. The filmmakers are correct in saying that this is a much different Superman than previous incarnations. However, it is precisely this approach that is the film’s most tragic flaw. What made the Richard Donner Superman movies of the 1970s so accessible and charming, was that we could follow the human side of Superman. The clumsy, geeky reporter Clark Kent who tried to woo Lois Lane was endearing because we could understand his behaviour. His Superman side also worked because it was a metaphor for our interior strength that we all aspired to reveal.

Man Of Steel chooses to present Superman simply as an alien trying to fit in with humanity… and that’s it. The best scenes in this film are those in which the child Clark struggles to reel in his incredible powers and fit in with the rest of his classmates. The concept of “being different” is one that most people, young and old, struggle with every day. Yet, this idea is never fully realised. Clark grows up to have zero people skills and no personality. As soon as he is old enough, he just becomes Superman, bypassing the loveable reporter character of Clark Kent. With no character arc or development, who cares what happens to him?

The flimsy storyline involves the destruction of Superman’s home planet of Krypton. Having completely drained its natural resources trying to impose its will on other planets, Krypton blows up. I’m not a geology expert, but this doesn’t make much sense. General Zod (Michael Shannon) attempts a coup to regain control of Krypton, but why bother when the planet is about to blow up? Superman’s father Jor-El (Russel Crowe) sends his baby son Kal-El to earth with the key to restoring Krypton’s fate. Kal-El grows up to be Superman, whilst Zod attempts to refashion Earth in the image of Krypton.

Again, why bother? In using the same tactics, surely Earth will blow up sooner or later also? As with Star Trek: Into Darkness, there is an implied metaphor at work here. America is Krypton and bad things happen when a country imposes its will on others. This is a recent trend in cinema (Avatar also comes to mind) which is becoming increasingly boring. It’s not enough to point out imperialist ideology, one must also discuss the racist motivations behind this belief. Thanks, but no…

Amy Adams is one of the finest screen actresses of the moment, and has a well-deserved four Oscar nominations to show for it. Unfortunately, having given so much of herself in those other films, she has decided to go for the easy money and play the one-dimensional Lois Lane. Here, Lois is a Pulitzer Prize winning reporter, yet displays no signs of actual intelligence. Indeed, her character is little more than “the love interest”. One minute Lois is interviewing Clark Kent in a graveyard, the next she is in Superman’s arms, locked in a passionate embrace. There’s no logic to this turn of events; it just happens. They go from barely knowing each other to falling in love, in the space of time it would take two plastered young people to get the shift in an Irish nightclub. Throwing in romantic scenes simply for the sake of it is just lazy scriptwriting. It’s also the most god-awful of commercial tendencies in cinema.

I am bewildered by the action scenes in Man Of Steel. Again, they don’t make a great deal of sense. Superman is battling General Zod. This narrative thread is an excuse for about 45 minutes of non-stop carnage. The two characters beat the bejaysus out of each other for what seems like an eternity. These scenes look like they were lifted right out of one of Michael Bay’s Tranformers films, with the characters knocking over dozens of buildings in a similar way. Indeed, the fact that I’m making this comparison should tell you how crap Man Of Steel actually is. How is this stupefying mayhem justified? The only conclusion drawn is this film is made with the 0 to 12 year old age group in mind who expect nothing more.

I wish I could give Man Of Steel a more in-depth analysis, but there really isn’t a great deal to go on. What is the point of a film like this? What is the theme? There just isn’t anything. What a shame that Christopher Nolan can go from directing an artistic game-changer like Memento to producing this garbage.

I cannot in good faith recommend this film to anyone except the parents of young children, as it will possibly keep them entertained for a few hours. Just about. It is mindless drivel made for the sole purpose of generating copious amounts of money. This notion becomes more apparent considering it is available in both 2-D and 3-D formats. Awful is awful, no matter what option is available. Also, there is no end of product placement with close-ups of Nikon cameras, Nokia smartphones etc., turning the film into one big advertisement. Corporate ass-kissing in cinema leaves a nasty taste in the mouth.

Most of my complaints are a given with this type of summer blockbuster/superhero genre movie, but really I expected some kind of artistic olive branch based on the reputations of all involved. There’s just… nothing here.