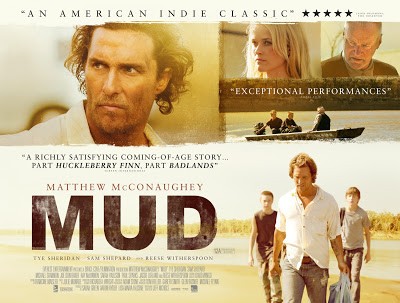 Writer-director Jeff Nichols is one of the most original and dynamic film-making forces in cinema right now. His debut feature, the simmering Shotgun Stories (2007) proved to be an impressive calling card, whilst Take Shelter (2011) pushed the boundaries of the modern American independent film. As with these previous efforts, Mud explores the complexities of familial relationships and the meaning of home. Unlike most other summer blockbusters that desperately insist at every available opportunity that they are “character based”, Jeff Nichols offers a non-patronising portrait of ordinary people that we all might encounter in our own lives.

As with his other films, Mud is set in the American South. In this case, it’s Arkansas. A slight emphasis must be placed on the geography, as Mud is operating out of the South’s very rich literary tradition. Ellis and Neckbone’s coming of age narrative is almost certainly a modern take on Mark Twain’s Tom Sawyer and Huckleberry Finn characters, whilst the ideas of poverty and unfolding destiny recall the novels of John Steinbeck. In terms of cinematography, there is the influence of Terence Malick throughout. This is not the tired, smarty-pants, post-modern “look-at-how-much-references-I-can-fit-in” approach so prevalent in the modern cinema, but rather one that creates a wider cultural context within to place this text.

The plot follows the main protagonist of the film Ellis as he deals with the painful early teenage years that many of us can identify with. His home is crippled with poverty and his parents are in the middle of breaking up. If this wasn’t enough to deal with, he has also discovered the inadequacies of teenage romance and the need for every young man to assert himself. Ellis and his plucky pal  Neckbone, live in an area where houses are built on rivers. It is a community slightly at odds with modernity and the government are threatening to close down such houses. To amuse themselves, as  young teenagers are apt to do, Ellis and Neckbone travel up the river, to a local island comprised of beach and forest. There they find a boat in a tree (!). How a boat gets in a tree, who put it there and why, is anyone’s guess, but it doesn’t matter in the grand scheme of things.

There they find the titular “Mud” played by Matthew McConaughey, who has claimed ownership of the boat. Mud is an outlaw, hiding out on the island and cultivating a plan. It is by no coincidence that he is staying there. Just as the island is cut off from the mainland, Mud himself is somewhat psychologically removed from other people. He is an enigmatic drifter who always seems to just appear out of nowhere. His speech pattern is a quiet murmur, every word deliberate and assured, even if his personality is not. He never sleeps in the same place twice and has a superstition for every occasion. McConaughey’s transformative process is also external. His face is weather-beaten and hard-bitten; you take one look and see a lifetime etched his face. Even the way McConaughey wipes his hands on his jeans, or guzzles a tin of meat, tell us so much about him. Mud has several snake tattoos adorning his body and when McConaughey inevitably reveals his torso, the effect upturns his own “star” personality. This is not simple gratification for the ladies, but a glimpse of a raw masculine force against the elements.

Mud plots a haphazard plan in which the 14 year old boys aid him to no end, bringing him food and supplies. Ellis and Neckbone help Mud bring the boat down from the tree so he can escape up-river with his girlfriend Juniper who is waiting nearby. Ellis is particularly spellbound by Mud’s charisma, who offers him some form of guidance and hope in a world that has given him none.

The film is a meditation on the impossibility of romantic love. Ellis’s parents, Senior (Ray McKinnon) and Marylee (Sarah Paulson) are just sick to death of looking at each other and have initiated divorce proceedings. Senior is particularly embittered over the promises both made when in love, and how they become meaningless over a lifetime. Mud invests far too much faith in Juniper, who has used him time after time since they were children. Ellis, being 14, falls hopelessly in love with local girl, Maypearl. The film questions the way we place the object of our affection on a pedestal. Love does not conquer all; sometimes it can’t even conquer the most simple of things. It is a philosophical aside that will linger in the mind of this reviewer for some time to come. Hope is never completely lost in this film, but it does take some unbearably dark turns. Yet, it also proves that those better angels of our nature; the love of friendship and family might suffice in its place.

Jeff Nichol’s script is just wonderful. His story is filled with engaging characters and situations that are achingly true. There is not one false note. The narrative is wholly concentrated on character, with the generic thriller elements used sparingly, to devastating effect. There is no doubt that this film is an incredibly personal statement for the director.

At any given time, it always appears to be dusk, with the cinematography capturing a perpetual twilight. The surroundings are bathed in gorgeous greens and browns, which evoke the promise of youth. Following Ellis is a joy; any male who grew up in a rural community will surely feel like they are retracing the footsteps of their teenage years.
,
With Mud, Matthew McConaughey has given a career-best performance. Which wouldn’t be too hard considering how god-awful most of his other films are. Gone are the days, we hope, of the stupefying romantic comedy garbage he has been churning out for the last decade, in which he plays preening, charmless twats. Indeed, in the last year alone he has delivered impressive leading and supporting roles in films such as Bernie (2012) and Killer Joe (2012). Even the no-nonsense Christopher Nolan has selected his talents for the upcoming Interstellar, which is sure to solidify his credentials as a bona-fide acting heavyweight.

This film deserves the widest possible audience. It is a labour of love in which every second is an absolute triumph. There is a sense that everybody working on this film, from the writer-director to the actors and so on., just…. care so much about what they are doing. No CGI, no 3-D, just care. It may turn out to be the best film of the year.