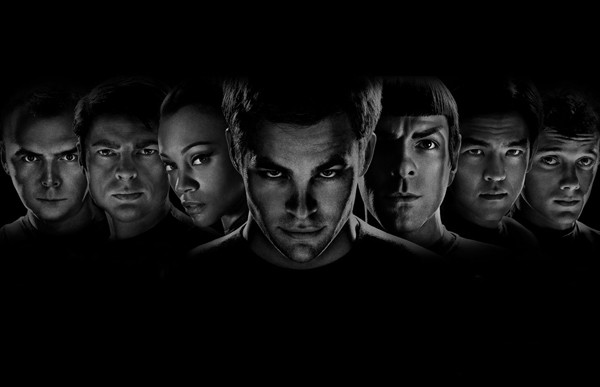 I’m not a Trekkie. Let’s get that straight from the get-go.

That being said, I have seen enough films in the Star Trek franchise to realise that J.J. Abrams’ 2009 reboot, simply entitled Star Trek, gave the series a much needed kick in the arse. What made that film great for today’s generation, was that you didn’t need to be a fan to enjoy it. It was one exhilarating intergalactic set-piece after another. It also allowed for enough character development for the polar opposites of the reckless Captain Kirk and the logical Spock, charting their lives from infancy to manhood. I almost didn’t mind the whole “you-blew-up-my-planet-so-I’ll-blow-up-yours” vengeance mentality that drove the plot forward.

Star Trek Into Darkness picks up where the last film left off. We are thrown head-first into an action scene which advances at breakneck speed. The USS Enterprise is observing a primitive planet, whose civilization is in jeopardy from a gargantuan volcano which threatens to explode. Amidst a backdrop of stunning visuals and perfectly timed edits, our heroes save the day in their usual manner. Kirk (Chris Pines) utilises his usual devil may care persona, whilst Spock (Zachary Quinto) conversely treats the adventure like a mathematical equation. Predictably, the two clash heads, but unfortunately this tension in their relationship is never fully fleshed out. Indeed, everything after this point is just disappointing.

The plot unfolds with the introduction of one John Harrison (Benedict Cumberbatch), a terrorist who wreaks terrible vengeance (unsurprisingly) against the Federation, whom he holds accountable for the death of “his” people. Wait a minute! Wasn’t this the plot of the last film?

From here on, one’s interest in the film drops like a sack of potatoes. The crew briefly arrive on the planet Kronos in an attempt to catch Harrison. Just as we expect a fully fledged war to break out between the Enterprise crew and those dastardly Klingons, our hearts racing and breath panting with anticipation of this possibility… Captain Kirk and company just abruptly leave, taking Harrison and our interest in the film with them. Now, that would have been a film!

The middle act is just painful filler. For a good 30 to 40 minutes, the ship is in danger from a rogue Enterprise ship called, wait for it… Vengeance! Everyone speaks in horrible engineer language about things nobody knows anything about. After much head-scratching and panic, Captain Kirk solves the malfunction by kicking some shiny thing several times. It is about as exciting as replacing the parts on a broken dishwasher.

There is a hint of political subtext, which remains just that. Admiral Marcus orders Captain Kirk to take advanced weaponry into Kronos when seeking out John Harrison for capture. If discovered, it would be viewed as a direct act of aggression toward the Klingons. It doesn’t take a genius to figure out the USS Enterprise, which seeks to help strange and exotic planets, is a metaphor for America’s imperialist attitudes towards foreign countries. It could be further argued that terrorist John Harrison is a metaphor for Al-Qaeda. In the coda, Kirk ponders what happens when one lowers themselves by treating terror with terror. So America’s domestic and foreign attitudes to war are somewhat skewed – and what? Tell us something we don’t know. It avoids the racial and social superiority complexes that underlie this mentality. The film makes a point, then sheepishly bows its head when asked to explain it.

For a sequel, there is precious little in character progression. Captain Kirk and Spock remain…. well, Captain Kirk and Spock. Zoe Saldana as Nyota Uhura, the tough, sassy female member of the first film, is resigned to being Spock’s hysterical girlfriend in this one, crying in every close up. Almost every line from “Bones” McCoy (Karl Urban) is a forced metaphor spoken with unnecessary vehemence, whilst Scotty (Simon Pegg) runs around like a headless chicken, worrying about the ship. John Harrison is mildly curious for about 5 minutes but fails to live up to his initial promise.

All in all, this is not a completely terrible film, but not one that I’d recommend. It is decidedly average and disappointing, considering how enjoyable the last one was. Frequent collaborators J.J. Abrams as director and Damon Lindelof as writer, do not put their considerable talents to good use here. Creatively, it appears both just phoned-in their talents.

In avoiding this film, you might just Live Long And Prosper. Yes, I did just say that.