“Fathers and Sons beyond the pines” – movie review by Ken Glennon 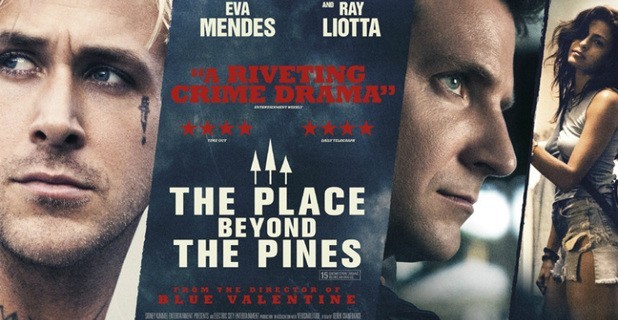 Following up his breakthrough feature Blue Valentine director/co-writer Derek Cianfrance moves from a deeply personal tale of lovers to an operatic saga of crime, corruption and the legacy passed down from fathers to their sons.

For a while the would be epic engages as Ryan Gosling brings Luke to vivid life, aided by one of the most unforgettable screen introductions as we meet Luke in one unbroken shot that starts at his carnival trailer and ends with three motorcycles overlapping in a giant steel cage.

While in town as part of a travelling carnival group he meets an old flame (played by Eva Mendez) whom he discovers he fathered a child with the year previously. She’s now living with his son and another man (Marshali Ali).

Deciding after one chance meeting with his son that he wants to settle down and be a father to the boy, Luke hooks up with a mechanic (played wonderfully by Ben Mendelsholn) who suggests bank robbery as a more lucrative line of business than auto-repair.

As this story sets into gear we are then rather abruptly introduced to Bradley Cooper’s rookie cop and the story segues from Luke to Avery’s.

Pines’ second major chapter involves police corruption and various moral dilemmas for the ambitious Avery whose headline making injury in the line of duty sets him down some fairly morally dubious territory to which Luke and his son are connected.

As this good man becomes gradually corrupted we jump forward one last time to Luke and Avery’s seventeen-year-old sons dealing with their respective father issues which, by chance or fate, pit them as friends in the same school.

Watching Luke try to connect with his son had a tangible emotional effect while the several bank heists pulled were captured with great flair by Derek Cianfrance whose staged getaway in a cemetery with Luke managing a flat tire is quietly outstanding.

Nothing moves with that emotional or visceral verve in Cooper’s section and, by the time we move a generation down in the story, a great deal of character investment has given way to something dangerously approaching boredom.

That isn’t to say there aren’t moments of brilliance scattered throughout The Place Beyond The Pines, especially in the first hour. At times Mike Patton’s moving score and Shame cinematographer Sean Bobbit combine for occasionally haunting, often moody effect as their respective aural and visual cues tie father and son alike years apart, as does watching one son inadvertently echo the sins of his father.

But the epic time jump leaves a few too many grey areas surrounding how each son ended up as they are whilst the descending segments of the story play out with heartbreakingly diminishing returns.

In a limited way I wish more of the story had revolved around Luke’s issues, and that Emory Cohen’s characterisation of AJ (Avery’s son) hadn’t grated to the level it did.

Dan DeHann slips into his role with more naturalistic flair but it’s hard to quite pinpoint why his character behalves in the way he does given the admittedly limited background information we have. The same goes for AJ; it’s like watching a partially-realised epic where so much needs to be established and moved on from within a compressed two-hour-plus timeframe. By the time we reach any sort of a conclusion it feels under-developed (in stark contrast to Blue Valentine which packed a far greater emotional punch on a considerably smaller canvas).

One of the more daring films on release in various Galway, Cork and Dublin cinemas, Pines offers a fractured, occasionally mesmerising experience that slowly and too quickly gives away to disappointment and disinterest in spite of the stellar talent in front of and behind the camera.