Every Tuesday at 11.30am on Flirt FM, James Falconer interviews a budding artist. This week he interviews Galway-based singer/songwriter Pa Reidy… 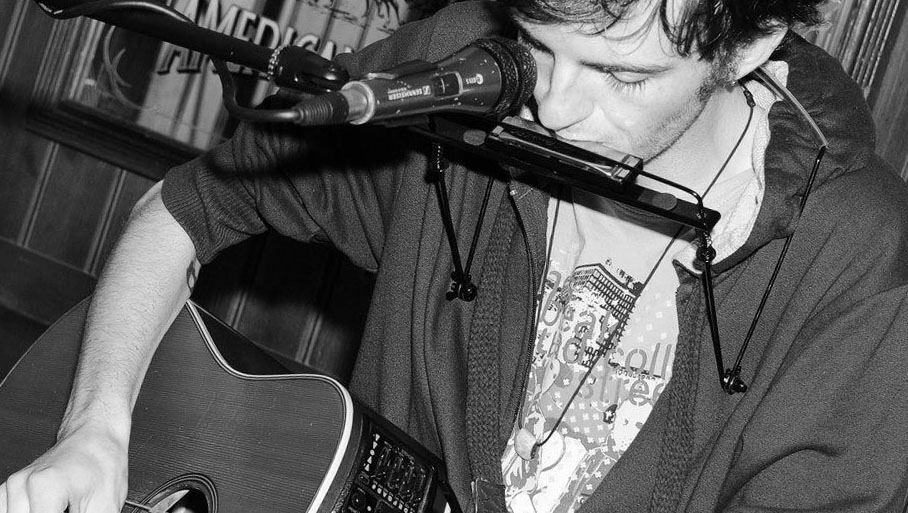 Hi Pa, so what brings you here today – your legs?

[laughs] Yes, I did walk in today!

I’d say it’s tough busking. You wouldn’t be able to put a car on the road and keep it there, would you?

You couldn’t really. Not on Shop Street, you wouldn’t get away with it!

Do you spend a lot of time on Shop Street, in Galway city centre?

Yes, most days I go out for 3 or 4 hours to busk. I love busking. I get to meet so many people and get a few bob for playing a few songs.

With your songs then Pa, are you trying to tap into any emotion in particular?

It depends on how I feel at the time. If I’m having a bad day I might rant and rave about the things that went wrong. But, most of the time I try to have an optimistic outlook in my songs.

The glass is half full, Pa! You’ve been playing a few gigs around town recently?

Yes, I’m getting a few here and there. I was playing at the Rosewood Sessions in Garveys bar on Tuesday night. It’s a good platform for a few of us. There’s a group of us who usually go to the same venues where unsigned artists play. There’s one in Garveys, the Cellar and also the Róisín Dubh.

I suppose the open mic in the Róisín Dubh. It’s on every Sunday night. Everyone gets one song each, and it’s a brilliant night. Every sort of artist comes in – you included James!

I’ve been known to drop in occasionally.

Everyone should try to come to it. Although, it’s been fairly mobbed lately, this is a healthy sign.

You are on the Open Mic CD – a compilation.

Yes, it was recently released, Vol. 1, the first of many I believe. The proceeds are going towards the Lily Mae Morrison trust.

Lily Mae Morrison is a 4 year old girl who has a rare form of cancer – neuroblastoma, an extremely aggressive childhood cancer of the nervous system.

Yes, it’s a bad story; they need the funds. It’s great to be able to help out in some way.

I’ve listened to the CD, it’s very good. Well done to all the contributors. How old are you Pa?

I’m 23. I’ve been playing music the past 4 years. I always wanted to sing, but I felt a bit of an eejit singing without any instrument! Then a family friend was leaving the country and she handed me her guitar and a year later I said “right, I’m going to learn how to play this.” I would recommend learning the guitar to anyone.

I’ve a guitar at home, but I don’t play it. You must come round to my house and I’ll make a pot of tea!

I have tried that. I just don’t have the patience. I want to pick up the guitar, and be Jimi Hendrix!

We all want that James. Well, at least you can sing.

Thanks a lot Pa. That’s a great compliment to get. Sometimes I find it hard because I sing a capella and I’ve nothing to fill the silent bits with. What benefits do you get from writing songs?

Well, I think song writing is a great way to get things off my mind. Turn the emotion into a song then it’s out of my mind for good.

Who was she Pa?

Don’t name drop! I had Padraig Jack in studio a few weeks ago. He wrote a song about a woman, but changed the name of it; the song is called Minnie, it rhymes with her name, in case she’d ever hear it then she wouldn’t know it’s about her.

She’d probably still know if her name rhymes with it.

Well, I thought it was about a man called Vinnie because I couldn’t think of a woman’s name that rhymed with Minnie!

Oh yes, Winnie. Winnie, if you’re out there?

Padraig Jack has written a beautiful song about you!

It is, yes. Well, I’m from a small town on the border with Limerick. Limerick is trying to push its way towards us.

There’s an encroachment, is there?

There is, yes. I don’t think they’ll get us for another few years anyway!

What about blocks? A lot of artists suffer from blocks. You want to write a song, but you can’t get it together.

Yes, I get that a lot. I could go through a few weeks without writing anything because it won’t come to me. Then there’s times when I might write 5 songs in a week. It all depends. I try to find the guitar riff first; I find it difficult doing it the other way round.

You released an album not so long ago. When was this?

I released it in November 2012. I had a launch night in the Townhouse bar and it went much better than I expected. The bar was full of family and friends. I sold a lot of CD’s. I’m still selling them, mostly on the street when I’m busking.

Where can we find more of your music online Pa?

Well, I have a facebook page called Pa Reidy Music so if anyone wants to get in contact – I’m available for bookings. I have a few songs on YouTube as well. Find me on Shop Street if you want a CD.

We’ll see you there, Pa.