We love comedy and in this article, Austin Maloney talks about Delicious O’Grady who is gigging in the Town Hall Theatre on Thursday night… 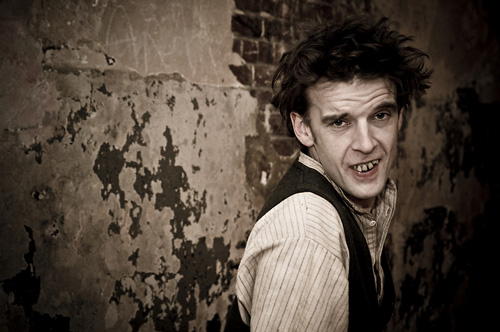 Delicious O’Grady comes with a pretty intriguing tagline; “Caution: contains nudity and potatoes”. If that isn’t enough to interest you in a play, it’s possible nothing will.

Delicious O’Grady is tragicomedy inspired by the work of Irish writer Flann O’Brien. The play is set at the time of the Great Famine in Ireland. It tells the story of the struggle and eventual demise of an Irish family living through this period.

Its star Colm O’Grady described it as “a celebration of the Irish people and their strength through the great famine”. One of the central themes running through the play is the quest to find the humour in the bleakness of the famine.

O’Grady stated that one of the main aims of the play was to tell the story of the famine while retaining an element of wit and entertainment; “You don’t have to beat people over the head and show them how miserable things were. You can show things in a poetic way”.

The play is directed by Cal Mc Crystal, whose CV includes work with the Circe du Soleil and The Mighty Boosh.

As the play is about the Irish Famine, having ‘potatoes’ in the tagline is explanatory. But where’s the nudity? Well, you will just have to go and see the play to find out. Delicious O’Grady is on at the Town Hall Theatre on Thursday 4 April at 8PM. Ticket prices are €15 with concession tickets priced €12.