Graduation ceremonies are meant to be happy occasions. James Falconer gives his opinion of his own graduation experience… 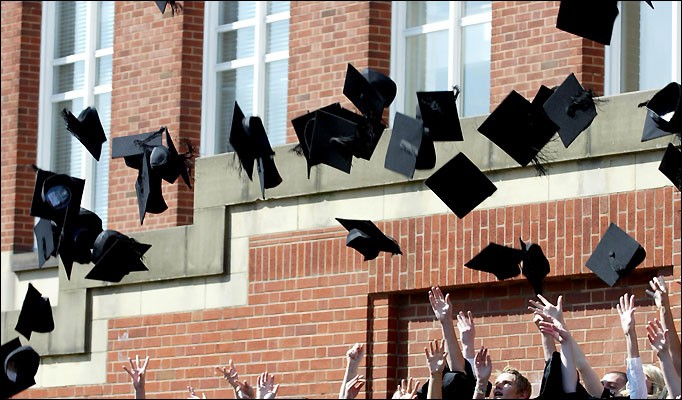 Whilst sitting in my graduation ceremony last October, I not only witnessed the strange attire and procession (how is a King’s sceptre related to receiving a degree in the Republic of Ireland?) of the university’s hierarchy, but also took umbrage with a remark, no, actually more of an aside made by an august academic.

I had, of course, expected a formal event, but to witness these academics encapsulated in their regal garb was dissociating, and to say the very least, comical. I felt like a bit of a “Richard” in my robe that I had to hire at an exorbitant rate: “Ah sure, it’s only the one day, and your big day it is.” Indeed, it was a proud day for graduates and their families alike, but I couldn’t help noticing how ossified and pretentious the event was.

My major grievance lies with a glib remark made by a senior academic in his far too lengthy speech, which seemed to usher time itself into some sort of suspended animation. He did impart some interesting things; however, I believe that he should have gone for quality rather than quantity. When talking about Pre-Norman Ireland he made reference to an age when Ireland was made up of five Provinces (Meath/Mide, the 5th Province), which with the passage of time duly became four. He then proceeded to inform us that; “This was before the swingeing cuts of the IMF.”

As he made this contemporaneous, supposedly innocuous, yet highly incongruous remark, sniggers of laughter arose from his colleagues who sat wallowing in the mist which seemed to ooze from his ill-chosen humour. At this point, I wanted to stand on my chair and scream. I refrained from doing so in consideration of the occasion, but maybe it was just what was called for. I didn’t hear any laughter from my fellow graduates.

One might wonder why I have an issue with such a remark. Well, I believe there is a time and a place for most things and I don’t think that was the time or the place for such a slur. Sitting under the nose of this €200,000 (or thereabouts) a year academic was a new generation of young graduates who are set to embark on careers, further study, or mostly likely, emigration. Speaking of which, there were many parchments uncollected and I soon realised that these graduates had already departed Ireland’s shore. Are these senior academics highly overpaid? How far removed are they from the “swingeing cuts of the IMF”?

Many senior academics in Ireland were paid a total of €8m in allowances between 2005 and 2011, which were unauthorised by the Higher Education Authority (HEA). While all these allowances were being given out, the presidents of our universities were maintaining that the Irish university was broke. UCD president, Hugh Brady tried to defend these allowances on the grounds that they were “the international norm” and that they were necessary to “persuade” staff to take on leadership and management roles.

Didn’t we hear similar platitudes from politicians when the global financial crisis was going supernova and probing questions were been asked about bank executives remuneration and bonuses? I didn’t experience any leadership at my graduation ceremony. I didn’t file away with any sense of invigoration or real hope for an Irish renaissance. I just filed away, glad of making it to the endpoint yet feeling the unease that comes with being parachuted onto a badly listing ship.

After four years of study, this was to be a farewell – a graduation. In other words, launch the life boats. The whole affair revealed the arrogance and grandiosity of some who inhabit the higher echelons of institutionalised 3rd level education in Ireland. The view of those who occupy the lonely eyries of academia can only ever be a strained one. In the surety of a gilded nest and generous nest egg, there must only be perpetual difficulty in attempting empathy with the on-going trials of the amorphous undergraduate masses passing below.

See, not every golden circle was sundered with the collapse of the Fianna Fáil marquee.