In this week’s editorial, Jessica Thompson discusses the Students’ Union Elections and why you should have your say… 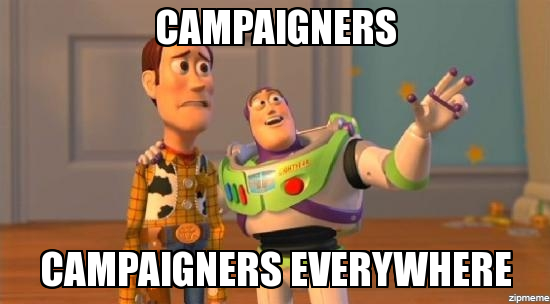 When Election Day came along, all I wanted was the sticker that said “I have voted, have you?” so I could avoid being attacked and eaten by the forty million campaigners I would encounter while I walked from my lecture on crime novels in block D to my Popular Music lecture in a basement on the other side of the building.

My solution on the day of the elections? Walk down the tunnel from the library, towards the Newman building, and whichever campaigner stopped me first would get my vote.

Before voting, I could step through the doors of the library tunnel and have campaigners flock to me like moths to a light bulb. After voting, I could simply flash the sticker; no words were needed. We had an understanding. The light bulb was now switched off, and I had voted for another stranger whose name I couldn’t even remember.

“Who did you vote for?” my friend would ask.

“Same!” and we would skip merrily to our music lecture, parting the crowds of campaigners like Moses parted the sea. We were free.

I never utilised the services of the SU. I never cared about the SU. Even last year, when I did my Masters in Journalism here in NUI Galway, I barely knew who was in office.

Then I became the editor of Sin and in November, I graduated with my MA and I started working closely with the Students’ Union here in NUI Galway. Suddenly my interest in student politics has increased immensely.

As Sin is the Students’ Union newspaper, the SU plays quite a big part in my life. I feel like the independent daughter, off living in my own flat, miles away from my SU family. Maybe I don’t join them for tea as often as I should. I realise I only call the President when I need something. I hardly ever visit the Education Officer and instead bug him via email or instant message, and the Welfare Officer runs away whenever he sees me coming. But despite all that, the SU still has a big impact on my job.

My point is the SU has a huge impact on you too, as a student. It’s all very well to swan into a polling booth and vote for whoever gets to you first. But you should stop and think; “Why vote for just anyone, when I have the power to choose someone worthy of the job?”

These candidates are trying to prove to you why they are better for the job than their rivals. If elected, they will represent you. They will make decisions on your behalf. Surely you’ll want someone competent in the job; someone who knows what they’re doing; someone who has your best interests at heart?

This year there are several candidates. You’ll see interviews with each of them in our amazing Election Special which comes as a supplement in this issue. I had the pleasure of meeting each and every one of them last week, as they came in one by one for interviews. I had the displeasure of realising that many of them borrowed pens from me and most of these pens were not returned. I have one pen left. I will guard it with my life.

Now listen to the campaigners. Let them flock to you like moths to a light bulb, because at that moment, you are, much like the light bulb to the moths, the most beautiful, brightest thing they have ever seen.

Take the manifestos, and see which candidate will fulfil your education needs and welfare needs. Who will be the most suitable to represent you as your SU President? Have your say, because if you don’t, you’re letting others have it.

So don’t forget to vote this Thursday 7 March. I wish I could vote. Isn’t it ironic that the year I realise the importance of these elections is the year I can no longer have a say in them?